I forget where you’re up to with my renovation saga.

Did I tell you that the latest plan is to stay put and make the place a bit more liveable for myself?

DD reckons my house is really well located, close to the city, and keeping it means we have a beach pad AND a city pad.

I think I mentioned that he came over recently and dismantled the trampoline and removed all the old lattice put the front, in the quest to brighten the place up.

I also got my brother in law to pop over the other day – he’s a former builder and owns a Choices flooring store – to discuss turning the back room into a master bedroom with ensuite.

He said my plans – which involved turning a narrow hallway and toilet into the ensuite – weren’t feasible due to space restrictions, so I went back to the drawing board and came up with new ones. They were inspired by the Holiday Inn we stayed at in Newcastle last weekend. The bathroom had frosted glass walls and an entrance door that swung open to ingeniously become the shower door. 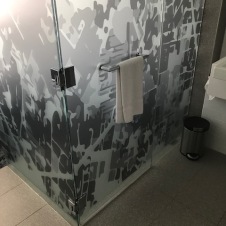 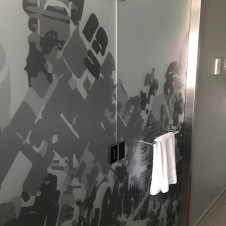 Me and my new bestie the tape measure have been having heaps of fun together since then.

I figure having glass walls saves oodles of space. Then the back room becomes my bedroom and we move the ill-considered french doors from the kitchen to my room, opening onto the backyard. (I put the french doors into the kitchen a few years ago, then realised there was no practical, inexpensive way to add a deck, so they’ve just been a pair of big, useless windows since then.

I will also get the place painted and add in some window shutters here and there.

Oh, and buying a dining table and my first-ever new sofa might be nice.

I just have to make sure that I don’t end up spending all the money that I gained by refinancing the mortgage, as I have no wish to start worrying again about how I’m going to pay my bills each week.

Fortunately, I’ve paid a lot of the dosh that’s needed for the trip to the World Skipping Championships. Well, aside from accommodation in Ottawa and car hire and petrol and three meals a day …

As for the existing bathroom, I’m leaving it skanky for now until my children learn some respect for porcelain.

Actually, scrap those plans. I’ve had another brainwave. This one is EVEN BETTER than the first one.

I know, I know …  The children just block their ears when they hear those words now, as I’m up to plan 500.

I’m too embarrassed to run you through the new plan, so I’ve just sketched it up and sent it through to my brother in law to get his verdict. It might be too expensive, but it gives the house a much better flow.

Song of the day: Buck’s Fizz “Making your mind up”