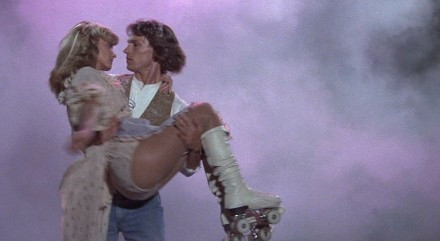 Xanadu and comfort food were on the menu at my place last night … it gets pretty trashy in the Household when the eldest isn’t around.

The youngest and I feasted on sausages and mash – the eldest hates mash – and curled up together to watch one of the best-worst movies of all time.

A place where nobody dared to go
The love that we came to know
They call it Xanadu
And now, open your eyes and see what we have made is real
We are in Xanadu
A million lights are dancing and you are, a shooting star
An everlasting world and you’re here with me, eternally
Xanadu, Xanadu

The eldest would not have approved of a romantic rollerskating musical fantasy. But the eldest was at a gifted and talented art camp in the Blue Mountains, so we had the place – and the TV remote – to ourselves.

Olivia Newton-John plays Kira in Xanadu, a muse who comes to Earth and falls in love with a mortal named Sonny, a frustrated artist played by Michael Beck  – an affair forbidden by the gods.

The plot sounds straightforwardish, but actual movie makes very little sense, especially to someone born in 2006. There were a lot of questions.

For example: why does Kira have an Australian accent?

Because Hollywood must have given up on our Liv mastering an American one.

Gene Kelly also stars in the movie, so the scriptwriter decided to shoehorn in some very cool tap dancing scenes.

Gene even dons rollerskates at one point, which made me feel quite nervous for his 66-year-old hips.

Fortunately, Gene was a pretty awesome rollerskater. Whether he was on his feet or wheels, that man could move.

Xanadu was a huge critical and commercial flop. Esquire famously quipped “Xana-don’t!” when the flick came out and it was nominated for worst picture in the first annual Razzie Awards. (It lost to Can’t Stop the Music, my favourite best-worst movie of all time.)

I was drawn to it as a teen because I was obsessed with rollerskating, which I did as my school sport for three terms out of four throughout high school. They wouldn’t let me do it every term, so I usually spent the fourth playing ping pong very badly.

I can’t say my skills at either sport improved much over the six years. I was such a clumsy, awkward kid.

My love affair with little wheels remained with me in my twenties, when I’d head to Gay Skate at the Majestic roller rink in Petersham on Tuesday nights. Those were such fun times, twirling around to ’80s disco hits as a disco ball twinkled overhead and Xanadu inevitably spun on the turntable, along with a few Cliff Richard classics.

Actually, Xanadu’s cult following since its ignominious beginnings is largely thanks to the LGBTQ+ community.

While the film didn’t score with viewers, the Xanadu soundtrack was a double-platinum smash, peaking at No. 4 on the US charts. The title track, which hit No. 8 in the States, was also a No. 1 hit in Europe, and the soundtrack yielded three more top-20 hits, including two ELO numbers, “All Over the World” and “I’m Alive.”

As for the youngest’s verdict on the movie, she thought it was whacked and needed some serious editing. But I’ve been singing the theme song ever since. It made me feel so smiley when Livvy started belting it out at the end.

I won’t be feeling so smiley when I have to drive to the Blue Mountains this afternoon to collect the eldest from camp. Flipping heck that’s a hike.

2 thoughts on “A place where nobody dared to go”