It was wasaaaaay too long, but the opening five minutes were awesome.

I thought it was such a wonderful message to broadcast to the world – 24 million people saw the ceremony in America alone.

These were some of my favourite bits:

The late Dr Martin Luther King Jr once said, and I quote: “We must discover the power of love, the redemptive power of love. And when we do that, we will make of this old world a new world, for love is the only way.”

Love changes lives, and it can change this world.

If you don’t believe me, just stop and imagine. Think and imagine a world where love is the way.

When love is the way, then no child will go to bed hungry in this world ever again.

When love is the way, we will lay down our swords and shields, down by the riverside, to study war no more.

And that, to me, is what religion should be about. But somehow it’s being twisted into an excuse for violence and hate.

How do people convince themselves God would want them to do terrible things to their fellow human beings?

That’s not the God I know.

I had a bit of a mongrel Christian upbringing. Not in the nasty person kind of way, but in the mixed breeding.

My parents had trouble finding someone to baptise me because they couldn’t promise they’d bring me up in a particular church.

Eventually the Presbyterians said they’d do it.

I think that was the last Presbyterian service I ever attended. There was a Baptist Sunday school bus that wended its way through Ashbury Street each week and Mum and Dad popped me on that.

The Baptists were a lovely bunch. They had an inspiring preacher, John Tuckerman, and a Girl Guides alternative called Girls Brigade.

It became a big part of my life.

But a teen romance eventually led to my churchgoing falling by the wayside.

I remain respectful of the beliefs of others and am incredibly proud of my childhood friend Katherine, who has gone on to become the first female Anglican Dean of Newcastle.

She is such a force for good in the world.

I was shocked by a post she shared on her Facebook page this week from Father Rod Bower at Gosford Anglican Church.

Father Bower is famed for his messages of love and inclusion.

During a recent sermon, a group of five men — one brandishing a whip and another a fake sword — stormed into his church.

One of their excuses for terrorising and traumatising his congregation was a message he put on a signboard outside the church on Anzac Day. 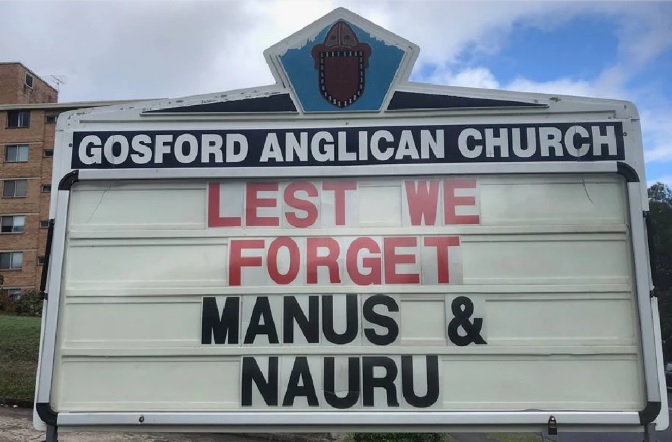 “If someone had suggested 10 years ago churches would be invaded by right wing extremists no one would have believed it … I don’t think I’m being alarmist. Who would have thought 10 years ago we would be imprisoning people in (immigration) camps?

“If Christians don’t speak out against this shift who will?”

I was stunned by the incident.

I was equally struck by another Facebook post – for the opposite reason – that featured Bishop Michael Bruce Curry and other US ministers speaking out against hate.

I was so moved by their courageous words, but scared for them at the same time. I worried they would be targetted for speaking out. Somehow it has become dangerous to preach tolerance and kindness.

How did humanity’s moral compass get so out of kilter?

I hope Bishop Curry is right and love triumphs to make of this old world, a new world because the alternative is a tragedy for us all.

Song the the day: Frankie Goes To Hollywood “The power of love”

6 thoughts on “The power of love”