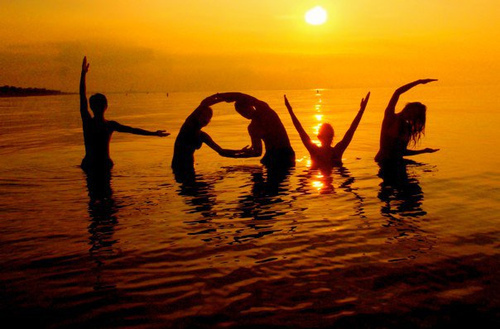 I’m beginning to realise my amicable relationship with my ex isn’t … “normal”.

Being antagonistic and difficult seems Far more commonplace when a marriage crashes and burns.

But then, I’ve always been an odd bod, so it’s hardly surprising I’ve chosen the weird path again.

I’m also a realist – I know the wheels could fall off at any moment. But so far – three years after the complexities of co-parenting began – so good.

I reckon the world – and the kids dealing with their parents breaking up – could do with more “abnormal”.

Last night my ex and I did the weirdo thing and went to parent-teacher speed dating together at the eldest’s high school. I noticed a few of the other parents checking us out like an exotic exhibit at the zoo.

We often get awed comments about how well we’re negotiating the post-apocalyptic world of co-parenting. People aren’t accustomed to seeing exes laughing and talking and sitting together at kid-related stuff.

I was reminded of the youngest’s teacher saying earlier in the year at parent-teacher interviews that many divorced parents request separate appointments.

I feel no need or desire to do that. I think it’s far more practical to sit together and discuss your child’s progress and problem areas so you can work on solving the issues as a family.

Last night, we only got to see the eldest’s art teacher – “working far beyong her years” – and English teacher – “we need to find a way to engage her” – as her science teacher was away sick and I couldn’t face the horror that would be the maths teacher’s assessment. I didn’t understand what the mystery letters after the other teachers’ names meant they taught, so I gave them a miss. I already know she’s not cross-country runner material and will be unlikely to progress beyond scrambled eggs, two-minute noodles and pancakes in the kitchen.

After the interviews, my ex and I chatted a mile a minute about what we’d heard and pondered the eldest’s disdain for school. I suggested my ex might have more insights than me into her behaviour … which almost got his back up slightly (I could tell by the way his voice went slightly squeaky when he asked why?), but he couldn’t really argue with my explanation that I was very focussed on succeeding at high school and he … wasn’t.

While my ex is wildly intelligent, he bombed out on the HSC. His love of learning came later.

But he struggled to offer any insights on how to avoid the eldest going down the same path.

My ex and I enjoy talking about our kids with each other. I’ve said it before – no one cares more about your kid than the other parent. In between the two interviews last night we nattered about the energetic youngest …. and her horrific allergies that are flaring up again. We’re racking our brains wondering what to do about them too.

I would hate to be parenting alone without him.

He’s the first person I texted when I found out the eldest’s jazz band also scored Gold at the NSW School Band Festival, following her SWE band result on Saturday.

He sometimes doesn’t reply to those texts until the next day. I expect it gets a bit awks to be sitting beside the updated model on the couch sending messages to the old model. But I want to share the good news with him as soon as I get it.

We are so proud of our kids and their successes. And we love them to bits.

That trumps our disappointment in our failed marriage every single time.

4 thoughts on “It’s a weird relationship”