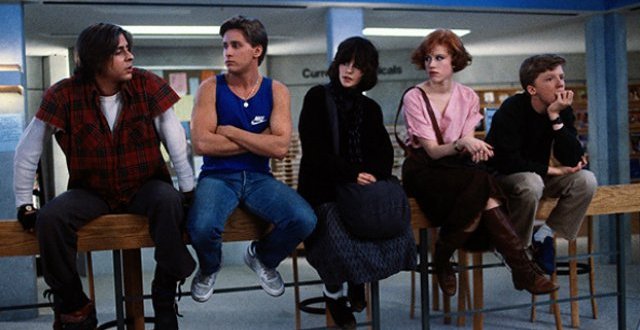 The youngest was at a sleepover party last night, so I made the eldest watch “The Breakfast Club” with me.

I should have been connecting with her, as it’s our second last night together of my holidays, but I was cactus from a week of not sleeping properly (I keep waking in the middle of the night and worrying), so I was only capable vegetating on the couch.

“The Breakfast Club” is one of 5 Dodgy Movies That Defined My Teens. I must have gone to the cinema 10 times to see it. All that teen angst spoke to me.

I was a mix of Brian the geek and Alison the weirdo in my youth. I was so glad to escape high school. Most of the other kids didn’t get me at all, with my dictionary vocabulary, spiral perm, green raincoat, tartan gym boots, red leather bow tie and black armband when Split Enz broke up.

Upon hearing the stories, DD has noted that he probably wouldn’t have got me either.

Many moons ago, I wrote a blog post about who I was in high school:

Even without the bow tie, I didn’t have the right look. My hair was red, my skin was pale, my freckles were extensive. I wasn’t popular with boys. I didn’t get kissed until I was 15, even then it was by a boy with no front teeth. I had a mad crush on a boy in the year above mine, Chris Evans. He was blonde and blue-eyed and gorgeous. He never gave me a second glance. He dated a dark-eyed beauty in my year called Alison. I eventually dated a boy in the year above mine, who hung with his own odd-bod crowd. They played cards every lunchtime in a classroom, not handball in the quadrangle. I think my boyfriend got invited to hang with the male-equivalent of the Duran Duran crowd, but decided his odd-bod friends more fun too. I was obsessed with fantasy and science fiction. My idea of a bulk fun day was to catch the train to Sydney and head to the Galaxy Bookshop. I was hopeless at maths, excellent at ancient history. I dreamed about time-travelling to ancient Crete (they had running water, you know).

I got a bit teary watching the bit in “The Breakfast Club” when the kids started talking about how determined they were to not turn out like their parents.

Andrew: My God, are we gonna be like our parents?
Claire: (teary) Not me…ever
Allison: It’s unavoidable, it just happens.
Claire: What happens?
Allison: When you grow up, your heart dies.

I can remember feeling like that … and now I am a parent … but my heart hurts too much sometimes to be dead. And I wonder if my kids will secretly vow to not turn out like me.

I also got a bit teary during the scene when the cool kids, Claire and Andrew, agree they wouldn’t acknowledge the geek and the weirdo in the hall on Monday morning, other than to have a laugh with their friends.

Brian: Then I assume Allison and I are better people than you guys, huh? Us weirdos… (to Allison) Do you, would you do that to me?

Allison: I don’t have any friends…

Brian: Well if you did?

Allison: No… I don’t think the kind of friends I’d have would mind…

It reminded me that being the weirdo might have its drawbacks, but it’s a nicer way to live your life than going down the cool princess route.

When the movie ended, the eldest kindly told me she quite enjoyed it and we both agreed it was pretty ridiculous that Allison got a makeover and Andrew the jock suddenly fell in love with her. But, overall, I thought “The Breakfast Club” stood the test of time pretty well.

What was your favourite movie as a teenager?

Song of the day: Simple Minds “Don’t you forget about me”

4 thoughts on “My weirdo heart”