I bought Husband two tickets to the St George OpenAir cinema at Mrs Macquarie’s Chair for Christmas. As anyone who has tried to buy tickets to the OpenAir cinema will tell you, that’s about as easy as a camel going through the eye of a needle. Especially when you forget to log on until 24 hours after the damn things have gone on sale …

So beggars couldn’t be choosers and I was reduced to purchasing tickets to Inside Llewellyn Davis on February 13. It was a Coen Brothers movies so I figured Husband – being an arty movie lover – would go for it.

But then we decided to separate and going on a date together didn’t seem quite appropriate, so I told him to take a friend instead rather than letting the precious things go to waste.

Well, I dodged a bullet on that one. Husband reckons Inside Llewellyn Davis was absolutely dreadful.

I have to admit I’m a bit of an anti-snob when it comes to my movies. I want them to make me laugh or cry or lust (all three in the one movie is the ideal combo).

Our differing taste in movies was one of the flaws in our relationship. Husband always wanted to analyse the living crap out of them and I’d drive him crazy with one-word reviews.

The last flick we watched together was This is 40 on DVD … kinda regretting that one. Waaaaay too close to the bone.

One of the few times our taste in movies aligned is Orlando, which would really have to be one of the most amazing pieces of cinema I’ve ever experienced. It transfixed us both. Husband was so blown away when we exited the Valhalla Cinema in Glebe that he immediately dragged me to a junk jewellery shop so he could get a drop pearl earring of his own.

Anyways. It’s popped up on Facebook this week that Footloose is turning 30 and Reality Bites is turning 20 and it’s made me all sentimental for the movies that I loved back in my young, carefree days.

So here they are … the films that defined my teens …

OK, I was only 12 when Can’t Stop The Music came out, but the teen hormones were beginning to rage and I was transfixed by all those buff men in sparkly costumes!

Somehow I didn’t cotton on that The Village People were gay and developed a massive crush on the cowboy, Randy. I like to think of him as my first love …

Oh, the hours I spent gazing lustily at this pic. Any other spare hours were spent practicing the construction worker’s dance moves to “I love you to death”

I must have gone to see Can’t Stop The Music 12 times at the cinema. I LOVED it, despite movie history concurring that it’s one of the worst movies EVER. Rotten Tomatoes gives it 8% and calls it “a film of such Brobdingnagian banality that it almost in itself stopped the disco movement cold”.

And I can’t quite believe one of the stars, Bruce Jenner, now looks like this …

Randy who? The moment I laid eyes on Kevin Bacon in Footloose I was a hormonal bonfire. Phwoar. This wasn’t some prepubescent crush, it was LOVE.

I remember praying to God every night to “please let me meet Kevin Bacon”. He filled the romantic fantasy gap left by Neil Finn getting married perfectly.

My friends and I would practice the “Let’s hear it for the boy” dance at lunchtimes in high school.

I ached to be Lori Singer, but knew I was more a Sarah Jessica Parker (fancy who’s turned out to be the winner in that little popularity contest!).

My lust for Kevin Bacon continues to this day and I’m deeply envious of the Facebook friend who met him walking his dog in Central Park once.

As for the remake, I hated it. Footloose is NOTHING without Kevin. NOTHING.

Fast forward five years to The Breakfast Club, which I spent vast amounts of pocket money seeing over and over and over again at the Lyrique Theatre in Wolfe Street, Newcastle.

The movie spoke to me and how I felt like as a teen (slightly less weird than the Ally Sheedy character, almost as geeky as the Anthony Michael Hall character).

And I thought Judd Nelson was the bomb. Boy did he go on to disappoint me later in life.

To this day, whenever I hear “Don’t You (Forget About Me)” by Simple Minds, I am transported in time … and all tingly.

Favourite lines: “We’re all pretty bizarre. Some of us are just better at hiding it, that’s all”; “When you grow up, your heart dies”; “Remember how you said your parents use you to get back at each other? Wouldn’t I be OUTSTANDING in that capacity?”

The love triangle between Ally Sheedy, Judd Nelson and Andrew McCarthy … swoon. Teen me was totally blitzed by the romantic drama of it all.

Not to mention the fact the movie also starred Emilio Estevez, Rob Lowe and Demi Moore. Ah, how I adored the Brat Pack … and the idea of having a Brat Pack of my own.

By that stage I kinda did. After struggling to 16 without being kissed (well, aside for that one night at a school dance when I got desperate and went for a bloke with no front teeth, but the less said about that the better) I finally scored a boyfriend with all his teeth and a rather attractive mop of blonde hair. A gang of us would meet at a dodgy pub called The Lucky Country every Saturday night for a few West Coast Coolers before running the under-aged gauntlet of the bouncers at the local gay nightclub, The Gunfighters Rest, for a few Spastic Goat’s Milk cocktails steaming with dry ice and dancing in mesh tops to New Order on the tiny UV-lit dancefloor.

But the St Elmo’s gang felt so much more grown up and exotic.

The movie got terrible reviews. According to Wikipedia …

David Denby called Schumacher “brutally untalented” and said that “nobody over the moral age of fifteen” will like the work of the Brat Pack actors in the film:

“St. Elmo’s Fire isn’t drama, it’s gossip, and peculiarly early-adolescent gossip— a movie designed to be picked apart on the telephone. The turbidly self-important treatment of these vacuous college graduates, each one a ‘type’, is like a TV sitcom without jokes. St. Elmo’s Fire is so depressing a portent of Hollywood’s teen sycophancy because it not only devotes itself to stupid kids, it accepts their view of the world without any real criticism….The sole survivor of the general disaster is Ally Sheedy, who manages to make something charming out of the yup petulance.”

Favourite lines: “No Springsteen is leaving this house! You can have all the Carly Simons”; “Marriage is a concept invented by people who were lucky to make it to 20 without being eaten by dinosaurs. Marriage is obsolete”; “You break my heart. Then again, you break everyone’s heart”; “And I think the reason I’m not interested in other women, and why I haven’t had sex in so long, is because I’m desperately, completely in love with you”; “You know Jules, there is the brink of insanity and then there is the abyss, which obviously you have fallen into!”

I knew Rob Lowe was waaaaaay out of my league, so there weren’t any boyfriend fantasies when About Last Night came out.

I watched it endlessly (and gave it another workout in-between sobbing with Sinead O’Connor during countless rotations of Nothing Compares 2U) when my first love and I broke up after six years. Surely if Danny and Debbie got their happy ending, we would too …)

And it still bothers me to this day what the special ingredient was that Demi said she put in the salad dressing on the night their relationship falls apart (it starts with a “c” and sounds like “colns” … any ideas?) 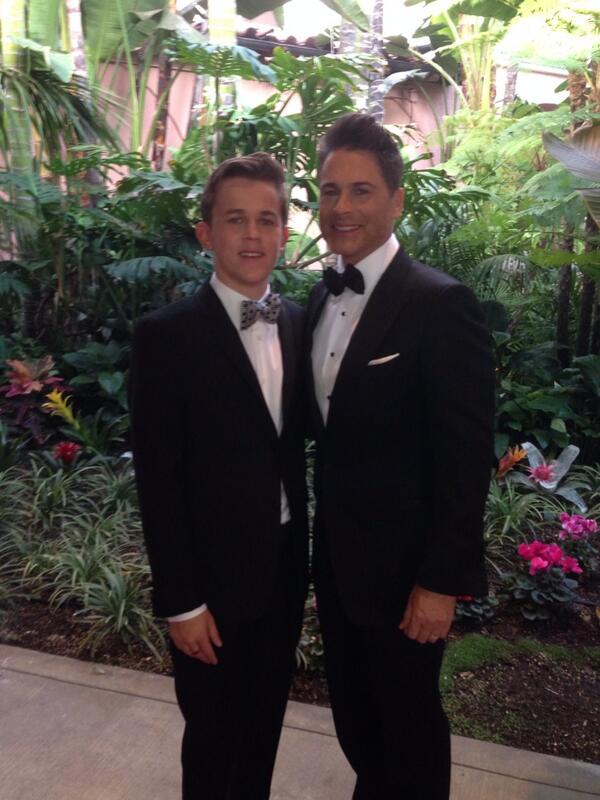 (That’s him with his son at the SAG Awards last month, hello? There has to be something supernatural going on.)
Favourite lines: “You don’t know what love is. You’ve gotten everything you have always wanted and now you’re feeling sorry for yourself because there’s something you want and you can’t have it. But you had it! I gave you love. But you asked me to leave and I left”

Danny: I think I thought it was going to be different than it…

Debbie: than what it was really like? Me, too. Maybe we were just – too naive.

Danny: Yeah, maybe. Maybe we knew too much.

What were your favourite movies when you were a teen?

7 thoughts on “5 dodgy movies that defined my teens”