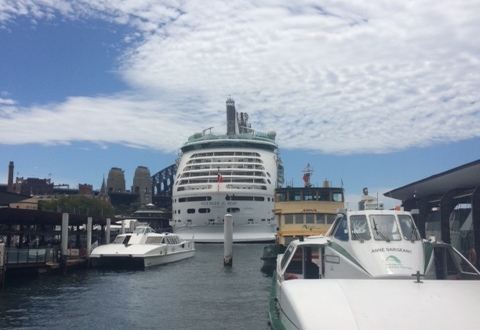 Five years ago today I went on a loooooooong cruise to Hawaii via Tahiti with my kids … and without my husband.

It was my last travel junket as a magazine writer. Talk about going out with a bang.

My husband could have squeezed into the cabin too, but he had zero interest in joining us. He equates cruising with the seventh circle of hell.

He also didn’t love me any more, so the idea of spending all that time together in close quarters gave him the heebie jeebies.

I only realised that bit later.

He packed me off with a list of instructions on how little junk food the kids were to eat and how many books they were to read.

I didn’t miss him during the 18 nights we were on the cruise … something my mind glossed over because it was a little too confronting to face.

My husband grudgingly met us in Hawaii at the end of the cruise – he regards Hawaii as being the sixth circle of hell – and I noticed he didn’t make eye contact when he greeted us at the passenger terminal. Again, it was something my mind glossed over because it was a little too confronting to face.

I was on edge during our week-long holiday that followed, worried about not living up to his standards of parenting. Not having to deal with his disapproval on the 18 preceeding days had been so relaxing.

While we were there, we had another of our numerous stoushes over my predilection for “easy” holiday destinations such as Hawaii and Fiji. I noted on my blog during that Hawaii trip: “Husband is threatening to drag/fly us to Vietnam next time we have the cash (fortunately that looks like being never). His idea of the perfect family holiday is challenging yourself a bit. Sounds like a fabulous opportunity for some father-daughter bonding without Mum to me.”

I’ve since realised how much oxygen and attention you need to give love to keep it alive.

You can’t toddle off on an 18-night cruise without a backward glance at your husband and expect your marriage to stay the distance.

I still wonder when our failing relationship reached the point of no return.

Was it on Waikiki Beach?

Was there a point it could have been saved if we’d both started trying a bit more?

Is it possible to fall back in love again?

Should we have tried harder?

So many questions have become moot points. We didn’t try harder. We didn’t notice – or care – that we were reaching the point of no return.

I swirl the marriage vows around in my head and think how beautiful and important they are: “To have and to hold, from this day forward, for better, for worse, for richer, for poorer, in sickness and in health, until death do us part …”

We screwed them up.

Are you divorced? Do you ever worry you didn’t do everything you could to save the marriage?

Song of the day: Lenny Kravitz “It ain’t over til it’s over”