Halloween tends to get some Aussies a bit agitated. I was (sort of) the same before I lived in New York. I didn’t see the point of it (but I skipped the righteous ranting).

After experiencing trick or treating on the Upper West Side I was hooked. 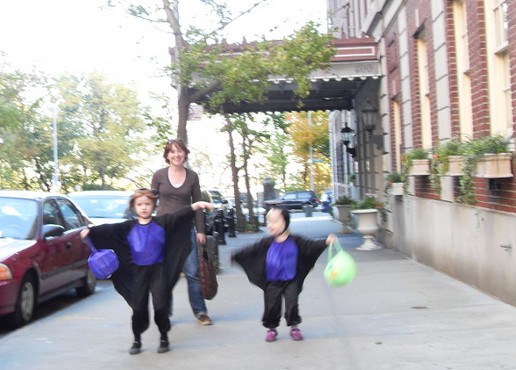 I loved the community spirit of the night, which is something that’s been embraced in our local neighbourhood. It’s a chance for the neighbourhood to come together – they set up picnics in their front yards, everyone has a laugh and a chat, the kids have a wild time … what’s not to like?

The girls and I really look forward to it. This year they’re both going as zombies, with much fake blood being splashed about. The eldest is also a dab hand at drawing fake wounds on her skin using glue and a red texta.

(Remember that time I sent my ex a photo of one as a joke then forgot to check my phone, so he spent the next two hours thinking she’d been mortally wounded … oooops.)

Anyways, even if you’re not planning on hitting the streets for Halloween, it can be fun having some kitchen together.

Here are some of my favourite spooky recipes from past Halloween celebrations.

Put a square of icing in the middle of each wafer. Add a small dollop of strawberry jam. Arrange on a platter with a Band-Aid box to enhance the effect!

Pipe cream cheese into pitted dates. Add two chive “antennae” to each date. Serve arranged on a platter. A couple of plastic flies enhance the horror.

Heat olive oil in a heavy-based pan. Cut layers of onion into fingernail-shaped pieces. Sweat them gently in the pan until soft. Tear sausages in half. Cut a thin wedge from the round end. Add a dab of tomato sauce. Place an onion “fingernail” on the cut end of the sausage. Make extra cuts midway down the sausage as knuckles. Arrange in halved hot dog buns with tomato sauce as “blood”.

Make your own dip or simply purchase a tub. Beetroot dip would be quite effective as “brains”, or turn hummus pink with food colouring. Line a plastic skull with Gladwrap and use as a serving bowl. Decorate with pitted olives that have rosemary leaves inserted along the sides as “legs”.

Plus: Here’s a Kidspot video that explains how to make my Band Aid biscuits

What’s a party without cakes? Here are some spooky ideas.

Preheat oven to 160°C (180°C fan-forced). Cream the butter, sugar and vanilla essence with electric beaters. Add eggs, beat well. Add milk and self-raising flour. Mix with wooden spoon to combine then beat with electric beaters until ingredients are incorporated (don’t overbeat, or cupcakes will be dry and firm). Spoon into patty cases in a 12-cupcake tray. Bake for around 12-15 minutes, until golden. Cool on wire racks. Makes 12.

Ice cupcakes. Place a Mars Bar Pod on top of each. Cut legs out of licorice straps. Arrange eight around each Pod. Use writing icing to give each Pod two eyes.

Prepare packet mixes according to directions. Bake in a casserole dish with rounded base. When cool, attach marshmallow poles around the top of the cake with toothpicks to form a rim. Ice outside of cake and rim with chocolate icing. Ice inside of cake with white icing. Scatter with lolly snakes, plastic eyeballs and creepy crawlies.

Plus: Here’s a Kidspot video that explains how to make my Tombstone cupcakes (sans the skeleton arms)

OK, so this was actually for an under-the-sea party … but those watermelon teeth are pretty scary, no?

And it’s not really a recipe. I just did some panicked carving. Good luck …

Do you have Halloween plans?