What was your verdict on the Logies last night? As usual it went waaaaaaay too late, not wrapping up until around midnight, there were mixed reviews of Kylie Minogue’s performance including allegations on Twitter that she was miming, and Richard Wilkins won the award for worst joke of the night when he announced: “It’s official: Scott Cam has the biggest deck on Australian TV.”

When Kylie Minogue announced Scott was the winner of the Gold Logie, he was overcome with emotion. “This is really unbelievable,” he said when he walked onto the stage. “I kissed Kylie Minogue, that’s pretty cool. It’s unbelievable that it’s 11 o’clock at the Logies and I’m sober, that is unbelievable! You should try it. . .

Things got wobbly again when it came time to thank his family. Scott had to clear his throat to mention of his mother, who has been ill, as well as his children and wife.

‘My three beautiful kids Charlie, Bill and Sarah are with my mum right now, I know they’ll be going ‘berko’, he said

His last thanks was for his crying wife, who he called “an absolute corker.”

Scroll to the bottom for the full list of winners.

Here are my faves from the night …

>> Jane Kennedy: “Thank you @BondiVet for my Logies treat”

>> In juicy post-Logies news, News Corp reckons that after the Logies, Kylie and Andy Lee “only had eyes for each other” at an exclusive party at Shane Warne’s Club 23, part of the Crown complex.

“They made the sweetest couple and nobody could take their eyes off them,” a source told News. “They were very flirtatious and looked to be thoroughly enjoying each other’s company.”

>> Kylie and Ed Sheeran (via Twitter): “#lovers I told you #EdGivesGoodHugs”

>> Dave Hughes (via Twitter): “This is my first and last Logies Selfie. #openwide#goodluckcarrie”

>> Sunrise (via Twitter): “#CashCow hits the #Logies with @sam_armytage@natalie_barr and @edwina_b#sun7”

>> Samantha Armytage also shared a pic on Instagram of her before and after make-up looks.

>> Shane Jacobsen (via Twitter): “Here we go at the Logies”

>> Michael Usher (via Twitter): “This is why the Logies are fun. @60Mins meets @HousosTheMovie#tvweeklogies@Channel9”

>> Georgie Parker (via Instagram): “Dressed by @mattheweagerdesigns . Love it . Logies is a go .🙌✨”

>> Later in the night, Georgie posted this shot (via Instagram): “@tai_hara @snowalec @jackson_gallagher_ . A little blurry , but at this time of night we all think that’s for the best.”

>> Chrissie Swan (via Moby Picture): “Thanks @TeKieroBoutique! We can finally announce that we’ve dressed chrissie swan for the Logies!”

>> Michelle Bridges (via WHO magazine Instagram): “Every night is date night” for loved up couple@mishbridges and @commandosteve #logies

>> And later during the awards. Awwww.

>> Meanwhile Hamish’s wife, Zoe Foster, who is 37 weeks pregnant with their first child, Instagrammed a pic of herself in white bathrobe as she watched the awards on television from a hotel room. Quite a contrast from her glam look last year.

>> Joh Griggs (via Instagram): “Thank you to Margie Skeggs for the amazing hair and make up, and to @helenmanuell for the most stunning frock, @elizabethjeanfor the beautiful jewels, and for @racheldennisstylist for making the whole thing happen. Loved it all. Had the best night…:)”

>> Rebecca Gibney (via Instagram): “Getting our blue steel on at the 56th TV Week Logies Awards with the gorgeous Danni Minogue”

>> And this one (also via Instagram) with her big sis, Kylie Minogue, and Paula Abdul. 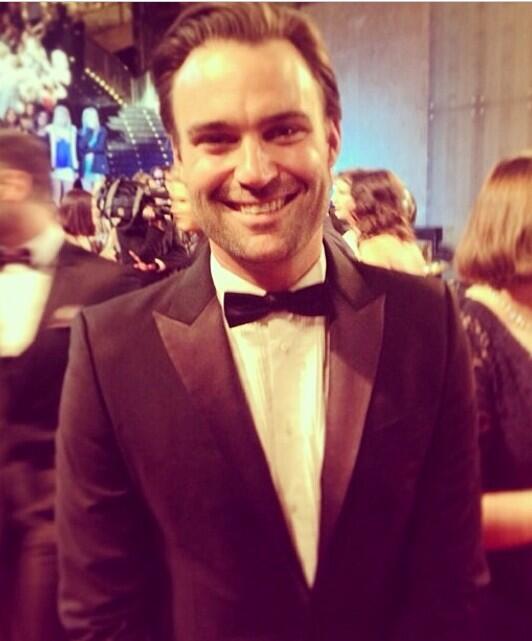 >> Jessica Tovey: “I am Ellen!! #tvweeklogies#wonderlandten#kylieminogue”

>> Emily Symons: “My HAA family…so proud of my boys #tvweeklogies”

>> Tina Arena: “Me and my sister Nancy on the red carpet #Logies2014#tvweeklogies”