I normally stick to a Monday to Friday routine with HouseGoesHollywood, but this couldn’t wait … 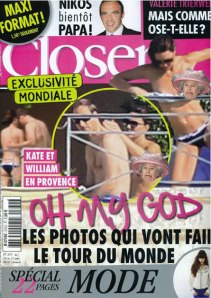 The British royals can’t seem to keep their clothes on when cameras are clicking. Only weeks after Prince Harry was embroiled in a scandal for being snapped playing naked billards, Princess Kate has been caught topless sunbathing. And the photographs have been published in the French magazine Closer.

The editor of the magazine, Laurence Pieau, has defended his decision to publish topless photographs.

“These photos are not in the least shocking,” he told the Agence France-Presse on Friday. “They show a young woman sunbathing topless, like the millions of women you see on beaches.”

News of the photos broke as William and Kate – dressed in headscarf – stepped out to visit Malaysia’s largest mosque, in central Kuala Lumpur.

The palace released an intial statement saying: “Their Royal Highnesses have been hugely saddened to learn that a French publication and a photographer have invaded their privacy in such a grotesque and totally unjustifiable manner. Their Royal Highnesses had every expectation of privacy in the remote house. It is unthinkable that anyone should take such photographs, let alone publish them.”

Pieau called the reaction to the photos “disproportionate”. But the royals don’t agree. They’re taking legal action in France.

“St James’s Palace confirms that legal proceedings for breach of privacy have been commenced today in France by The Duke and Duchess of Cambridge against the Publishers of Closer Magazine France,” a St James’s Palace spokesperson said in a statement Friday.

Blake’s romantic walk down the aisle

Awwww, so sweet … People magazine has revealed details of the song Blake Lively walked down the aisle to when she married Ryan Reynolds.

“A choir of 10 children, from First Baptist Church, sang “Can’t Take My Eyes Off of You” by Frankie Valli, as the bride walked down the aisle Sept. 9.

“To protect the couple’s privacy, and ensure the discretion and secrecy of the day, the parents of the kids singing were given non-disclosure agreements to sign, and their cell phones were taken before the ceremony began.

“A rep for the children from First Baptist Church School told PEOPLE they were thrilled the kids got to participate in Lively and Reynolds’s big day.

“We were so excited when we learned the children performed in Blake Lively’s wedding,” the rep says. “We learned about it on the radio.”

Wow, those kids really did keep it quiet, they didn’t even tell their own church! 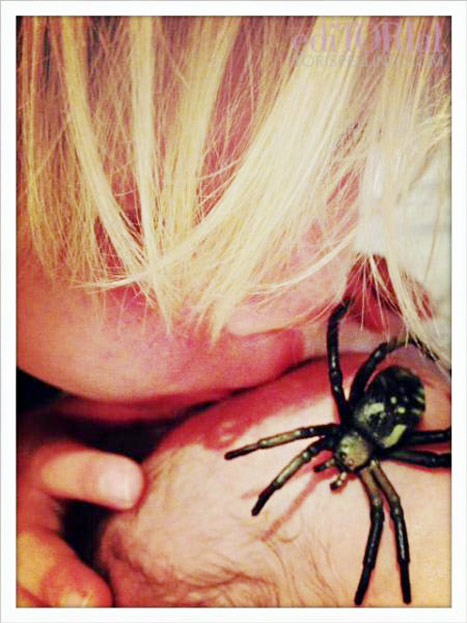 * Tori Spelling has posted a new photograph on her website of eldest son, Liam, 5, kissing his baby brother, Finn, 2 weeks, on the head. “Last night Liam was with me in bed while I was feeding baby Finn. I said to him, ‘Liam, we need a nickname for Finn. We have Monkey, Buggy and Hattie Cat. What should Finn be?’ He thought about it for a moment and then said, ‘Tarantula!'”

* Pamela Anderson has slipped into her red Baywatch bathing suit again while filming a commercial. Check her out!