Prior to becoming a stay-at-home mum, I never thought much about the first day back at school (other than “Thank god, my childcare bills will no longer hover around the $700-a-week mark.”). Husband usually took the Sprogs while I drove to work. When I came home, the Sprogs would tell me all their news: who their teacher was, who their classmates were. It was nice. Yesterday wasn’t nice. Yesterday was STRESSFUL. I was wound up in knots. The Sprogs didn’t seem particularly concerned, but I was beside myself with worry – would they be in the same class as their friends, would they get a good teacher? I insisted Husband go along and support Sprog 1 while I supported Sprog 2. Noise levels in the playground were so high, I couldn’t even hear the teacher on the megaphone calling out kids’ names. I just stood on a picnic bench and craned my neck over the heads of hundreds of other nervous parents. Just to really gee me up, they allocated the kids to their classes in alphabetical order. Sprog 2 was one of the last to be called, as her last name starts with a “W”. I watched her various classmates skip off with their new teachers while she remained crouched on the asphalt. My heart was in my mouth. I saw the last of her friends herded into Mrs W’s class. The class seemed awfully big, too big to support the addition of Sprog 2. Around me, children were sobbing as their mothers tried desperately to comfort them. Angry toddlers were screaming that they wanted to GO, they were BORED. It was horrible. Finally, Sprog 2 sprang to her feet and joined her friends. She clutched The Blonde One Who Looks Freakishly Like Her and grinned at me, pointing excitedly. The Blonde One Who Looks Freakishly Like Her was a bit grim, as her best friend had been separated into another class and Sprog 2 was the consolation prize. I briefly worried that The Blonde Who Looks Freakishly Like Her might make a nasty remark to that effect – and burst Sprog 2’s delighted bubble – but I’ll cross that bridge when I come to it. Then all the mums adjourned to the coffee shop across the street. The noise levels remained megaphone-required high while everyone compared classes and teachers and friends and slights and incomprehensible moves. And all the toddlers screamed that they were STILL BORED. It freaked me out. I just wanted some peace and a Diet Coke, but a friend took me by the hand and said I couldn’t, because yesterday was the day I said I’d stop doing all the bad stuff. The chemical-ladened drinks, the carbs, the sneaky chocolate. Sigh. So I went for a walk instead. Eventually, I started calming down and not want a Diet Coke quite so desperately. When I got home it was 11.30am, only three hours before I had to turn around and deal with it all over again. I savoured the silence for a few moments, before realising the wind had blown the chook door open and they were kicking every single wood chip from our garden onto the concrete. So I chased them about for a bit. Then I made some Bill Granger berry muffins. Sprog 1 pronounced them delicious. Pic above.

PS I don’t think our mums stood around in the playground worrying about what class we’d be in when we were kids, did they?

LAST NIGHT’S DINNER: Back on the horse! Gordon Ramsay’s Shami Lamb Kebabs with yoghurt & mint dip, grilled eggplant with tahini dressing, cous cous, veg (pic below). Slightly jiggled by me. Very tasty, enjoyed by all family members, which doesn’t happen every day. Well, the Sprogs liked the kebabs and cous cous bit. They made vomit faces about the eggplant.

Method: Put onion, cloves, fennel, tumeric, pinch of salt and half the mint into a food processor. Blitz. Put mince in bowl, add onion and spice mix and egg and mix well. Shape into small patties. To make dip, mix yoghurt with remaining chopped mint and zest. Heat oil in frying pan and fry kebabs for 3-4 mins on each side until nicely coloured and cooked through. Drain on kitchen towel. Sprinkle with lime juice and serve with dip.

Method: Cut eggplant into thick slices and brush with olive oil. Grill. Transfer to a serving plate and drizzle with olive oil and lemon juice. To make tahini dressing, mix tahini, yoghurt, lemon juice, honey and garlic in a bowl until evenly blended. Stir in 1-2 tbsps hot water to loosen the dressing until it is the consistency of thick double cream. Season to taste with salt and pepper. Transfer to a serving bowl and drizzle with olive oil. Spoon onto eggplant as desired. 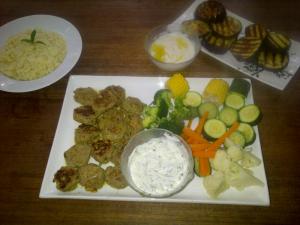