I had a nightmare that DD and I had a huge fight before Dr Michael Mosley’s Centenary Institute oration.

We were so cranky that we didn’t even sit together.

I was quite upset when I woke up, it felt very real.

And it turned out to be a premonition. Well, kind of. DD and I had a little fight after the event. But, still, spooooooooky …

The fight was sparked by me panicking about being late to the next event: The Angostura Global Cocktail Competition. I really, really don’t like being late.

Dr Mosley’s oration, which was held at the ICC, was meant to end at 5pm, but lots of people wanted to prove how clever they were by asking obscure questions, so it ran over time.

The Angostura Global Cocktail Competition kicked off at 5pm at the Smoke bar at Barangaroo House. Tantalisingly close as the crow flies, but a frigging long trek around the harbour in high heels.

It’s not pretty when I panic about being late. I become completely and obsessively wound up. My face goes all tight and unpleasant.

DD made fun of my tension levels, so I gave him the finger and told him to eff off, which is pretty standard behaviour among journalists. But it turns out I’ve never told DD to eff off – while simultaneously giving him the finger – so he was offended.

Things were a bit tense when we arrived at the Angostura Cocktail Challenge, flustered and 30 minutes late.

Then DD had a premonition of his own … he wished some slider burgers would appear … and they did!

Smoke is on the top level of Barangaroo House and has the most fabulous views of the harbour. The food was delicious and I loved the Pina Punch cocktail. I’d head back there for a fancy libation in a heartbeat.

I was also very excited that a Tasmanian bartender, Rohan Massie from Rude Boy in Hobart, won the challenge. Go Tassie!

Afterwards, we jumped in a cab and headed to the William Grant Sydney Bar Week event at Cruise Bar in Circular Quay.

It looked so cool with its Glenfiddich double-decker bus bar, Heindricks Gin airstream trailer and Sailor Jerry’s convertible, but we felt sooooooooooo old.

Everyone else was around 25 and ready to party on a Monday night.

We tasted one of the new Sailor Jerry RTDs, DD tried the Balvennie whisky, I sipped a Hendrick’s gin & tonic, we checked out the view from the bus, then listened to the official speeches before heading home – and leaving all the free alcohol and food behind – at the ungodly hour of 8.30pm … but it felt like about midnight as we collapsed in the cab.

Poor us! Middle age is an exhausting thing.

As for our argument, I think DD has forgiven me. I hope so, as we have a 5th anniversary coming up that I’m keen to celebrate.

Here are some happy-ish snaps from the night (play Where’s Wally and see if you can spot me in the pic with the people cheering): 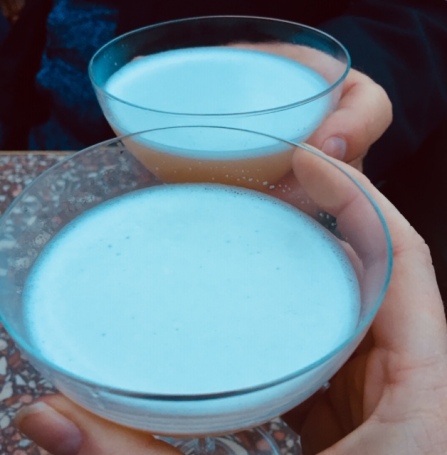 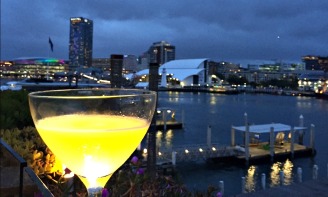 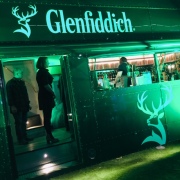