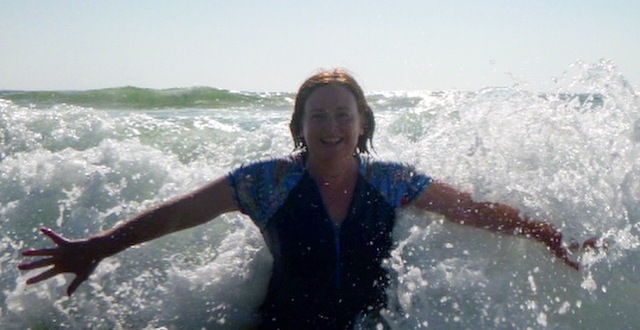 When we’re in the surf together, DD will sometimes hug me tightly from behind as a wave breaks in front of us.

I can’t jump or dive or turn my back, so the salty water crashes over my face.

In a previous life, it would have made me very cranky. In this life, it makes me laugh.

I like the way DD’s strong legs stand firm in the swirling water and we don’t stumble in the tumult.

A similar feeling wends its way through much of our relationship.

His calm strength often saves me from falling … it also helps with my constant fear that people are angry with me.

I worry about heaps of other things, but not usually that with him, which makes a nice change.

While I’ve incited DD’s anger occasionally, it takes pretty extreme behaviour to wind him up.

And I mostly try to avoid extreme behaviour.

I marvelled at a scene in the movie Palm Beach where the wife of Richard E Grant’s character gets so fed up that she calls a cab and leaves him.

He chases after her and begs her to stay.

I can’t imagine storming off like that. It seems a little too melodramatic.

No, I tell a lie, I did something similar via text message once – coward – and regret it terribly.

I’ve resolved to never act so impetuously where love is concerned again.

I’d prefer to talk things through and hope the situation can be solved without dramatics.

I’m also hoping DD’s calm continues to rub off on me. I’m waaaaay more easygoing than I used to be, which isn’t saying much, but it’s a start.

It’s been a little difficult to keep the panic at bay lately, as I deal with teenagers, my outgoings exceeding my incomings and perimenopause.

I was pretty tightly wound last weekend and even apologised at one point for an anxious screech that escaped my lips.

I was renowned for my calm in my younger days. My nickname as a cadet journalist was “Speedy” after the cartoon mouse, because I was so laid back.

And I ran Woman’s Day magazine for six years with gentle composure.

But a lot of floodwater has passed under the bridge. My emotional joists could do with a little maintenance.

Do you find yourself becoming more zen or more cranky with age … or do you veer wildly between the two like me?

Song of the day: Frankie Goes to Hollywood “Relax” (OK, it’s a very different kind of relaxing … but the song name suits the blog post …)

(It still dazzles me that this song gets played on commercial radio every day.)

3 thoughts on “Calm down”