I spent all my birthday gift cards yesterday. It was such delirious fun for a woman looking down the barrel of a $12,000 bill for her child’s nasal surgery and braces.

Free money that can only be spent at Westfield!

The cards were sacrificed at the altar of Witchery. I’m now a Silver Member, which meant I got a bonus $50 voucher, which I also promptly spent.

I selectively looooooove Witchery. A lot of this season’s stuff looks like something a rich grannie would wear to church  – lots of lilac, high-necked chiffon shirts, little covered buttons and pouffy sleeves – but there are some gems when you dig around.

There were ankle boots on sale that rocked my world so much I bought them in black and tan.

When I told DD I’d bought boots he asked me to send a pic, bless him. So I took this one at my desk: 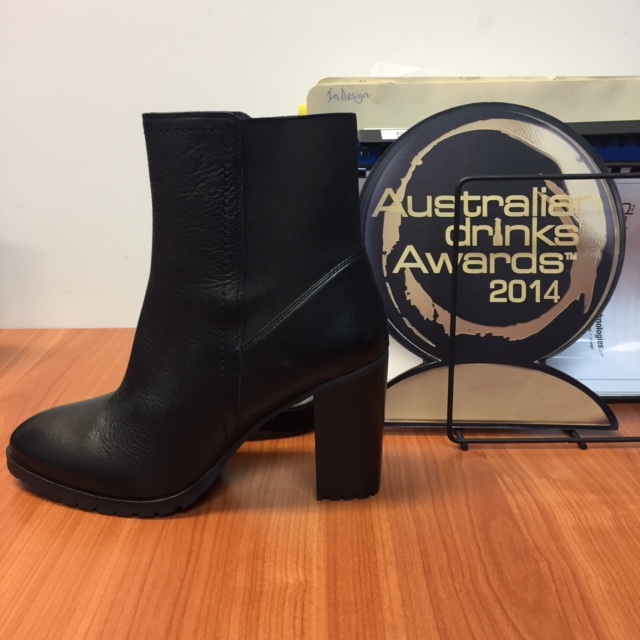 You’ve gotta love a boyfriend who shows an interest in your shopping. He’s a keeper.

Yesterday was quite the consumer festival. The youngest sent me to Calvin Klein to spend her birthday gift cards – she wanted a crop top and undies set. She’d originally begged to buy them online, but I said that was a waste of postage money. Then I happened to wander past the actual shop and saw there was a buy one, get the second for 40% off sale on.

And then I got an extra 10% off for joining the membership club.

After work, I headed to the dry cleaner for the first time in a gazillion years and suddenly realised where the “taken to the cleaners” phrase must have come from.

Two jackets and a silk top had been stuffed in a bag behind my bedroom door forever.

I handed them to the bloke at the counter, he asked for my phone number, looked it up and noted that I’d never been there before. I said that it wasn’t personal, I hadn’t visited any dry cleaning establishments in the past decade.

Then he told me how much it was to clean the three items – $67 WTF – and I said “I’ve just remembered why I haven’t been to the dry cleaners in the past decade.”

Even he was a bit embarrassed by the price – $67 included a discount because I was “new”. He also kept murmuring “very special fabric, very special.”

I soothed my frazzled financial nerves in Woolies afterwards by scoring an absolute bargain – the Legally Blonde trilogy on DVD for $10.

I’ve been keeping an eye out for cheap movies the youngest’s might like to entice her to hang out with me on the couch.

I’m also hoping we can pop our Titanic cherry together while she’s recovering from her surgery.

As for this child-free weekend, I plan to laugh a lot with my boyfriend and have my last wetsuit-free swim in the ocean for the season.

As you do when it’s predicted to be 22C and the water temperature is still 21C.

Hope you have a great weekend and the queues aren’t too long at your local polling booth.

3 thoughts on “Party in my pocket”