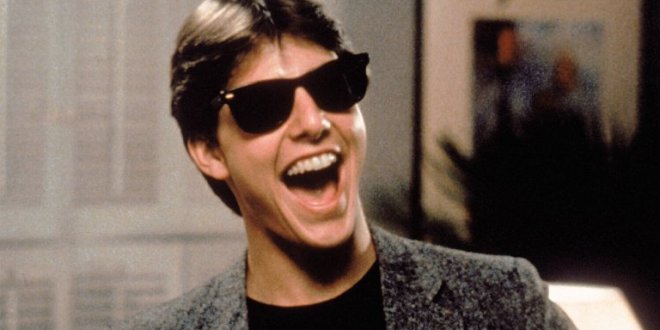 It’s the Tom Cruise classic featuring the iconic scene where he slides across the hallway in his socks and undies, lip syncing to “Old Time Rock & Roll”.

Until last night, that was the only part of the movie I remembered.

Anyways, the youngest wanted to watch tellie with me, so I searched through my DVD collection, spotted Risky Business, thought “aha, a movie about a teenager, this should hit the spot” and pressed played.

I was startled to rediscover that Risky Business is a movie about a teenager getting laid by a prostitute while his parents are out of town, illegally driving his dad’s Porsche at high speed before accidentally letting it roll into a lake, and organising a sex party for his friends so he can make enough money to get the Porsche repaired.

According to Commonsense Media: “This popular comedy earned its R rating. It has sex (both in comical fantasy scenes and reality), full-frontal female nudity, profanity (including “f–k”), glorified substance abuse, and an especially jaundiced outlook: A teen embarks on the road to manhood by becoming a part-time pimp, and the message is that in modern America, that’s a wise move, financially and socially. Because the young hero is played by good-guy star Tom Cruise, and because his character escapes punishment in the end, young viewers might interpret this as an endorsement, not a subversive satire. This movie is from a time when cigarette smoking was still widely viewed as part of a cultivated “cool guy” image, and that look is embraced right from the opening scene. Teen characters get high on marijuana and drink alcohol as well.”

Hand me the Mother of the Year trophy now!

I was also beyond thrilled to notice a pimp in the movie called Guido was wearing the exact same necklace the eldest has requested in their Santa sack.

Risky Business was critically acclaimed when it was released in 1983 – it’s celebrating its 35th anniversary this month, wow I feel old – so, how did it shape up as entertainment in 2018?

I’d have enjoyed it far more – despite its “especially jaundiced outlook” – if it wasn’t for the trauma of my 12-year-old sitting beside me while Tom had steamy sex with the prostitute in an empty train carriage.

Sooooo … what did the youngest think of Risky Business?

PS Here’s a fun fact: Before she was a Emmy-winning actress, Megan Mullally from “Will & Grace” played a hooker in Risky Business. Wearing pink lingerie and with a cigarette dangling out of her mouth, she appears for just a few seconds. In the end credits she’s listed as “Call Girl.” But good luck spotting and freeze-framing her, many others have failed before you.

2 thoughts on “Not a wise move”