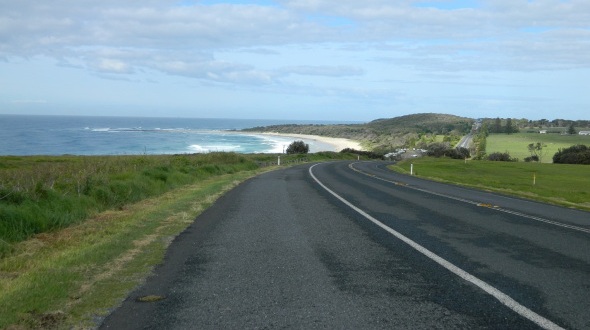 Unfortunately it’s a car accident that happened on Easter Saturday after I went for a swim at Angels Beach near Ballina.

T-boning a South American backpacker – called Macarena, I kid you not – on The Coast Road on Easter Saturday is not what I had planned for my blogging break. But, as you’ve probably noticed, Alana and drama are destined to go together like a horse and carriage.

We were actually very lucky, if we’d have pulled out a few seconds earlier onto The Coast Road I reckon ambulances would have been called. As it was, just two cars had to be triaged not four people.

As Macarena’s English and understanding of police protocol and the Australian insurance system was a little patchy, she called two Ballina cops to the scene of the accident for what they thought would be a few minutes of traffic redirection but turned out to be an hour of “No, they don’t have to hand over a wad of money on the spot” repeat assurances.

Finally, I got my very first ride in a tow truck with a sweet bloke called Josh.

Josh and I got to know each other quite well as we waited for the South American backpackers to finish arguing about “compensation.”

He’s a volunteer firefighter in his spare time, has a seven-year-old son, is finally great mates with his ex-partner after an ugly court battle and is booked to go on a cruise through the Panama Canal next April. He was also kind enough to drive us around to various car hire places in Ballina in his tow truck as we searched for somewhere that had an available car on the Easter long weekend.

Bless him. I suspect that’s not what happens after car accidents in Sydney.

While it was a relief to eventually find a car to hire for a couple of days – that we weren’t allowed to drive back to Sydney … sigh … problem only half solved – T-boning a South American backpacker on The Coast Road cast a bit of a pall over Easter Saturday.

We’d headed up the coast for Bluesfest 2017 and were on Day 3 of our five-day passes when the prang occurred. After finally collecting ourselves and new wheels we headed out to see some more music to soothe our souls. After briefly considering a pity weep for myself in the smashed up car on the side of The Coast Road, I thought I was fine. But, as I stood watching Billy Bragg – who was awesome – I felt a wave of clammy nausea sweep over me and had to sit down for most of the rest of the afternoon and night. Every time I stood up my stomach would start to lurch again. 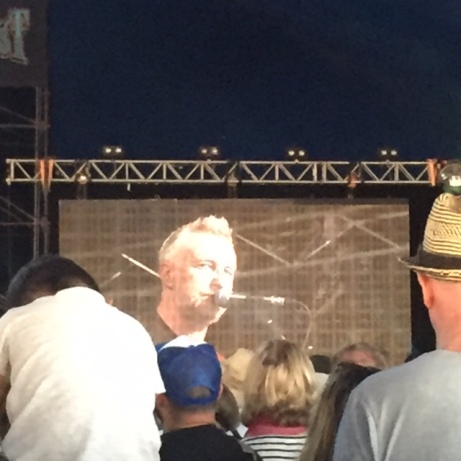 There’s a bit of South American melodrama in me too, so I self-diagnosed myself with delayed trauma … but maybe it was just the dodgy chicken sandwich I had for lunch.

Anyways, that was the low point of my blogging break. But it was a bit of a symphony in three parts. I’ll fill you in on the uplifting crescendo-y bits tomorrow.

Good lord I feel old after watching that clip. Billy Bragg is a BABY in it. He looks like a granddad now.

One thought on “Not as sexy as it sounds”