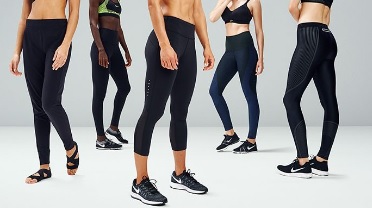 The youngest asked every man and his dog for Rebel vouchers for her birthday – she accumulated quite an impressive haul. They were burning a huge hole in her pocket, so I was railroaded into visiting Westfield over the weekend to spend them.

What I didn’t quite realised was that our only objective was to buy black Nike sports leggings. Nothing else. Not T-shirts or netballs or hoodies or wetsuits or goggles or sneakers or mini table tennis sets or cossies.

It took more than an hour to satisfy all those requirements. I was very close to totally over looking at black leggings by that point.

She finally settled on the perfect pair … And then I saw the price tag … Prepare yourself … $110.

That’s right, $110 for a pair of black sports leggings.

She still had quite a few vouchers left to spend at Rebel after paying for the $110 leggings, so we drifted around the store rejecting everything until it became clear that the only other thing she really wanted was another pair of Nike sports leggings that looked pretty much the same as the other pair, except they had mesh inserts in different places and only cost $79.

I still think $79 is a bit steep for a pair of black leggings, but anyhoo …

I figure it’s her birthday money and if all she wants as a birthday present is two pairs of astronomically priced black leggings, then so be it.

She was so delighted with the leggings, she wore them to her friends’ birthday sleepover on Saturday night, matched with a blue Adidas singlet purchased with previous Rebel birthday vouchers.

She looked pleased as punch with herself as she strode out of the car.

I am feeling a bit nervous about the teen years if it takes that much faffing to get a pair of black leggings.

One. Hundred. And. Ten. Dollars.

Song of the day: Belle Epoque “Black is black”

6 thoughts on “Black is not black”