There appear to have been no serious repercussions from the Mummy Loses It incident. The youngest yelled “Byeeeeee, Love you!” as she exited the car at school yesterday morning.

I still feel a bit crap about it, but you live and learn.

The healing process has been helped by her early birthday present – a desk – being delivered in a flatpack yesterday afternoon.

You gotta admire a kid that asks for a desk for her birthday. I was dragged to a homemaker centre on the weekend in search of one that would fit between the A-frame of her in-bedroom play equipment – space is tight in the third bedroom – and we found the perfect one in Adairs on sale! Adairs had ticketed the desk wrongly … waaaaaaaay wrongly … so it was an absolute bargain that they honoured after realising their error.

The youngest wanted to put it together straight away, but I said it might have to wait until she got back next week (it’s her weekend with her dad).

Being a NOW kinda girl, the youngest wasn’t too keen on waiting until next week. So, as I cooked her favourite dinner – sausages and mash – she studiously got to work in her room putting it together herself … 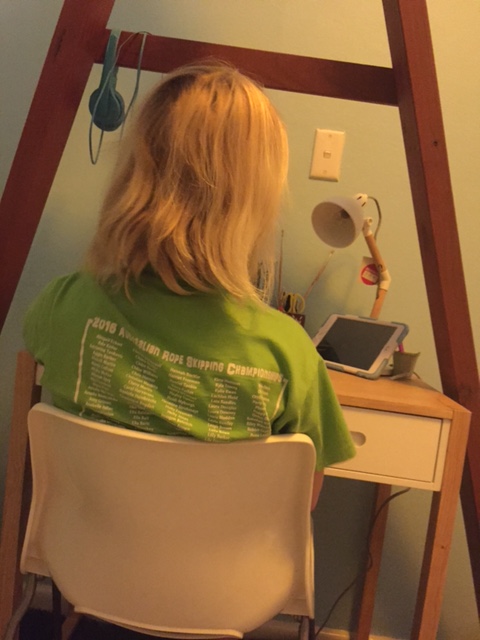 Gotta admire that too.

Speaking of determination … I made the mistake of letting the youngest near the latest Aldi catalogue last night, so now she’s on the hunt for a relative to buy her a cut-price guitar as a birthday present too.

The youngest is a girl who knows what she wants and resolutely pursues it until she gets it.

She is her mother’s daughter.

However, in further mothering missteps, I gave the eldest $40 yesterday so she could go shopping after school with a friend and get herself an iced chocolate and a pair of black jeans from Kmart.

When I picked her up she announced she’d forgotten my request to bring change and had not only failed to buy jeans (none of them suited her, apparently), but had spent all the cash on art supplies and a book.

Again, you live and learn.

The teen years are going to be interesting … and potentially expensive … if I don’t watch out.

5 thoughts on “All is forgiven”