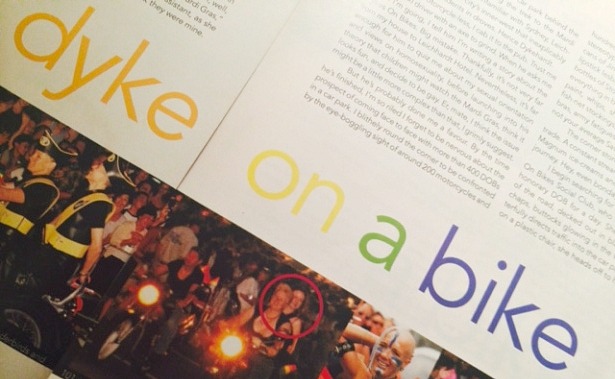 Everything and nothing is happening in my life right now. My brain feels like a pinball machine on double time as the thoughts ping about. Who, what, where, why … While I wait for news and clarity,  I’ve decided to blog a story I wrote for Cosmopolitan magazine 16 years ago (another attic discovery). Reading it made me cringe a little – too oh-er for my liking now. (NB That’s me in the red circle.) But here goes …

I never thought I’d be ashamed to be heterosexual – until the day I was a Dyke On A Bike. It’s hard to describe the feeling of straddling a Suzuki and coasting down Oxford Street in the 1998 Sydney Gay and Lesbian Mardi Gras parade, as 750,000 people frantically wave and scream encouragement. At first it’s completely exhilarating – your chest tightens with emotion and a lump swells in your throat. Then your jaw starts to ache from smiling so much. You begin to feel like Sally Field on Oscar night: you like me, you really like me!

Then it hits you – how much you’re missing out on. You realise how incredible it must be to be a lesbian and have so many people supporting you. And you feel like a fraud. You want the crowd to stop being so nice to you because you don’t deserve it. You’re just a journalist from Cosmo who’s writing a story. Even though you’re pretending to be a Dyke on a Bike (DOB) for a day, you’ll never really know what it’s like. But, if it feels this good to just be a Straight Girl on a Bike, it must be awesome.

MUM, THERE’S SOMETHING I HAVE TO TELL YOU …

I think it’s a measure of how far Australia (or at least my family) has come, that my mother was excited rather than horrified to hear I was taking part in the Mardi Gras parade. And that my grandmother taped the broadcast of the event so she could freeze-frame me for posterity.

For my part, I wasn’t particularly concerned about someone spotting me in the crowd and thinking, “Omigod, I didn’t realise Alana was a lesbian!” However, I’ll admit that when I picked up the pictures of myself in the parade from the photo lab, I babbled a bit, “Uh, well, ah, you see, I’m actually writing a story about Mardi Gras,” I anxiously assured the indifferent shop assistant, as she flicked idly through the shots to check they were mine.

THE DOBs are congregating in the car park behind the Leichhardt Hotel before making the trek to the Mardi Gras parade. For readers unfamiliar with Sydney, Leichhardt is a suburb in the city’s inner-west that inexplicably attracts lesbian residents in droves. Hence Dykehardt.

Being motorcycle-less, I cab it to the pub. Trust me to get a taxi driver with an axe to gring. When he asks where I’m going, I tell him I’m writing a story about the Dykes on Bikes. Big mistake. Thankfully, it’s not very far from my house to Leichhardt Hotel. Nevertheless, it’s far enough for him to quiz me about my sexual orientation and views on homosexuality, before launching into his theory that children might watch the Mardi Gras, think it looks fun, and decide to be gay. Er, mate, I think the issue might be a bit more complex than that, I grimly suggest.

But he’s probably done me a favour. By the time he’s finished, I’m so riled I forget to be nervous about the prospect of coming face to face with more than 400 DOBs in a car park. I blithely round the corner to be confronted by the eye-boggling sight of around 200 motorcycles and hundreds of outrageously attired lesbians. There are your stereotypical dykes – cropped peroxide hair, big muscles, cans of Jim Beam and Cola in hand. Then there are your lipstick lesbians – lithe bodies, artfully applied make-up, bottles of Stolichnaya Mules. And then there’s everything in between – studded dog collars, gold body paint, whips, shaved heads, mohawks, chains, spikes, fishnet stockings, dainty court shoes, leather chaps, lacy bras, army fatigues, and lots of body piercings. Definitely not your average Saturday afternoon at the supermarket.

The corner store across the road is doing a roaring trade. A constant stream of DOBs are wandering over for Magnum ice-creams and chips to sustain them on their journey. Hey, even bondage fans get the munchies.

I begin searching for Janet, president of the Dykes on Bikes Social Club, who has agreed to make me an honorary DOB for the day. She’s standing in the middle of the road, decked out in black fishnets and leather chaps, buttocks glowing in the waning sun as she masterfully directs traffic into the carpark. Plonking me down on a plastic chair, she heads off to hunt down my ride.

ARE YOU GOING TOPLESS?

There’s no way, under any condition or mind-altering substance, that you’d ever catch me topless in a carpark in broad daylight. Let alone on a parade route with 750,000 people watching. Everyone who knows me knows that, but it doesn’t stop my friends asking – with an amused glint in their eye – when they hear I’m going to be a DOB.

So, what DO you wear? Earlier in the week I quizzed Janet on dress rules and she insisted that anything goes.

“We even had Bananas in Pyjamas one year,” she says. “But black is always a good choice. ” So I settle for black jeans and a sheer-ish singlet – with no bra. Oooo-ah!

From my perch on the plastic chair, I can’t see any Bananas in Pyjamas. But there are plenty of sword-wielding Xena Warrior Princesses, Indians, cowgirls, Amazons, goddesses, bondage fans and military afficionadoes – not to mention a crowd of leather-clad Vixens, a motorcycle club from my home town of Newcastle (go girls!).

I’m surrounded by women who seem completely at ease with their bodies. They stroll by in chainmail bikinis (ouch – won’t that hurt on a motorcycle?), body stockings and lingerie. Sure, there are lots of perfect bodies, but just as many imperfect ones. A few of the women are bare-breasted – to the delight of passing motorists – and I ask one whether she had to psyche herself up to do it.

“Oh, god, no,” says Lee, astonished. “They’re beautiful, I want to show them off. I get really shitty when women cover themselves up because men stare – why does it have to be like that?” In her early 20s, Lee attracts plenty of looks with her mass of dreadlocks and a body that’s covered head-to-toe in gold paint. “So why aren’t you going topless?” she asks me.

I splutter for a second, then babble something about there being too many people pressuring me to do it. So I’ve chosen to rebel against their stereotypical expectations. Otherwise, of course, I’d have loved to …

Janet has russled up a ride for me with Bridget from the Blue Mountains. Bridget seems very sweet and a little shy. She hasn’t been in a Mardi Gras parade since 1983 when “things were a bit different”. I feel sorry for her. Everyone else has “a Babe on the Back”. She has the chick from Cosmo. She does her best to include me – we tape rainbow flags to her bike and stick coloured Cellophane over the headlight. Meanwhile, some wag has put It’s Raining Men on the jukebox and it’s blasting across the carpark.

I confess to Bridget that I’m actually a motorcycle novice and am feeling a tad nervous about the ride. She happens to choose that moment to cheerfully inform me she hasn’t even ridden a motorcycle in years. In fact, she just borrowed this one from a friend for the night.

“Well, fancy that!” I exclaim brightly. Noooooooo! I silently scream. Damn it, I knew I should have gone and made that will. Now I’m going to die intestate …

WHAT IS IT WITH DYKES AND BIKES?

Most of the DOBs I quiz insist there’s nothing usual about women riding motorcyles. Lots of women have them, not just lesbians. The only difference, apparently, is that lesbians do their own maintenance.

“I did a motorcycle maintenance course,” says Lee, “and all the women there were lesbians. I asked them what straight women do about their bikes, and someone said they get their boyfriends to fix them.”

Then there’s the sexual connection. “there’s the thrill of having something big and throbbing between your legs,” enthuses Lee’s friend, Sue.

I approach one of the Babes on the Back to get a passenger’s point of view. “The vibrations that go up your legs from the foot pedals … mmmm, they feel really great,” says leather-clad Nic with a lascivious grin.

GYM MOVE OF THE MONTH – THE LEG-OVER

It’s time to go! I heft my leg over the motorbike and strain a few unidentified groin muscles in the process. Bridget politely asks me to get off. She needs to turn the bike around first. Oh. Ooops, sorry. I clamber off, then back on again. (Mental note: mounting a motorcycle gracefully seems to require practise.) Finally, we hit the road.

We drive across town, up and down suburban streets. People come to their front doors, wave as we drive past and wish us a “Happy Mardi Gras”. Not one person expresses the slightest shock or disgust. Perhaps they’re scared (the DOBs are thrilled that Fred Nile lives in fear of them), but maybe I’ve underestimated the general public. “I’ve never had abuse yelled at me – well, not in the parade, anyway,” Jenny tells me.

As part of the pre-event entertainment, the DOBs take a slightly different route to the other 7000 gays and lesbians in the parade. Rather than starting in the heart of Sydney’s CBD at Hyde Park, moving up Oxford Street through Darlinghurst’s Taylor Square and finishing at Moore Park, we do the entire route in reverse. The DOBs used to be part of the parade, but their motorcycles kept overheating. So now they zoom up and down instead, to rev up the crowd. As we head off at dusk from Moore Park, there are just a trickle of people on either side of the road. But the crowds get bigger the closer we edge to Hyde Park. By the time we’re halfway down Oxford Street, I’m awestruck. Twenty minutes to go until the parade officially gets underway, and everywhere I look, there are thousands of faces. People, streamers and balloons hang from every balcony. Everyone’s waving and cheering. It’s mind-blowing. Feeling cocky, I decide not to hang on to Bridget anymore 0 well, only when the speedo edges over 10km per hour.

At Hyde Park, we park our bikes alongside a group of Christians, who are singing hymns and waving placards urging us to repent. Alongside them are a group of grannies complete with folding chairs and eskies, waving merrily as they hold hankies over their mouths to block the petrol fumes. A DOB revs her engine, sending gusts of carbon monoxide over the Christians, but they remain stony-faced. I can only imagine their horror when the float featuring a giant penis rolls past an hour later …

Oooops, sorry, I can’t find the last page. If it turns up, I’ll add it to the blog.