OK, so I got my first UGLY comment on the blog yesterday. And it came from a friend. I never expected to get trolled by a friend. Weird. But I’m soldiering on with blogging, even though apparently: “You think you’re SO interesting but you’re as ordinary and dumb as they get. Pull your head out of your ass!!! YOU split up your family. YOU ruined your marriage …”

That was the non-expletive-ridden bit. Nice, huh?

Anyways, here’s what happened in celebrity land this week … it’s much happier news:

>> Ryan Gosling is going to be a daddy!

He and longtime girlfriend Eva Mendes are expecting their first child together.

Ellen DeGeneres tweeted her congratulations saying: “Congrats to @RyanGosling and @EvaMendes! That’s going to be the most beautiful, bilingual, part-superhero, well-dressed, romantic baby ever.”

>> Robert Downey Jr and his wife Susan, 40, are expecting their second child. Robert made the announcement on Twitter on Wednesday: “Yo. Susan. Me. Baby. Girl. November. Scorpio?”

On Facebook he wrote: “Um. I don’t know if it’s a ‘man’s world’, but I’m certain women run it. Susan and I are therefore delighted to announce we are expecting a baby. Girl. November. rdj.”

The couple are already parents to two-year-old son Exton. 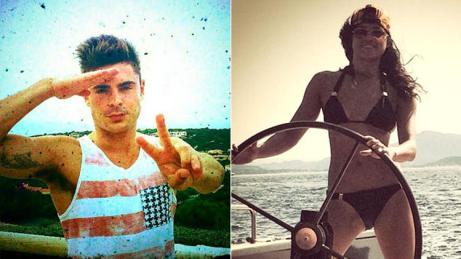 >> Zac Efron and Michelle Rodriguez have been spotted kissing while on holiday in Sardinia together. (Click here to see the pics.)

There have been some mumurs about the pairing being ill-advised in light of Zac spending time in rehab for a rumoured drug addiction last year and Michelle making headlinesfor her wild antics and party lifestyle – including a short stint in jail for hit and run and driving under the influence (DUI) charges.

>> Lara Bingle shared a pic of herself sipping a cocktail with and her partner Sam Worthington on Instagram.

>> Reese Witherspoon normally keeps her private life that way, but she couldn’t resist sharing a pic on Instagram of her 21-month-old son Tennessee James.

Reese and her family spent the weekend in New Orleans and she captioned the image: “Last day of beignets with my boy #NOLAstyle.”

>> Rachel Boston shared a pic on Twitter of Jenna Dewan-Tatum covering husband Channing Tatum‘s eyes as they watched the season two premiere of  her TV series Witches Of East End.

>> Ringo Starr has celebrated his 74th birthday by modelling for fashion designer John Varvatos, for his new Fall 2014 Campaign. “I’ve waited a long time to become a male model,” he joked.

>> Things got a little crazy when music manager Scooter Braun married cancer activist Yael Cohen in Canada July 6. The wedding included performances by Justin Bieber, Carly Rae Jepsen and Ed Sheeran. Bieber also posted a bizarrely fun Instagram video of Tom Hanks dressed as a Rabbi, singing “This Is How We Do It:”

“Everybody thought I was going to wear a dress that completely showed off my new bod,” Jessica told People. “But I can’t help but want a princess dress! I’m a Southern girl at heart. I like everything big!”

>> Americans celebrated Independence Day over the weekend. Click here for my gallery of28 celeb snaps. Above is Usher.

>> And, finally, I compiled a “Celebrities on holiday” gallery for escape.com.au. Click here to see it. The image above is Laura Dundovic on hols in Indonesia.