I had an awful … and wonderful … weekend. That seems to be par for the course in my life lately.

I’ve been a bit under the hammer – escape was on my mind. I decided to fly north to visit my friend Paul.

Paul has been a rock for me since I was about 22 and he was about 35. We both worked at The Newcastle Herald at different times, but met much later on a magazine called Design Series. He was the chief sub-editor and taught me how to sub after I’d spent nine months on the dole during The Recession.

He also introduced me to laksa and showed me how to paint my first house. 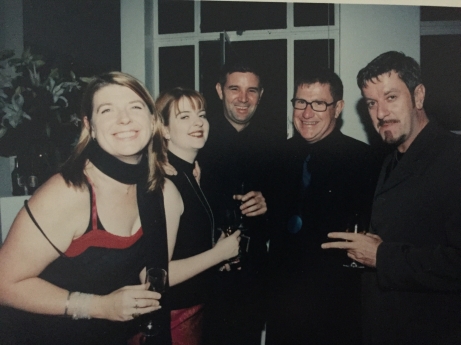 That’s Paul second from the right at my wedding.

He was there for me when my marriage fell apart too. I spent a few weekends with him during the emotional months that followed – he’d listen very patiently as I tried to make sense of it all.

It’s been a shocker month and I needed an old friend, so I booked another flight.

Paul collected me from the airport and took me to his favourite Singaporean restaurant, where I ordered one of my all-time die-die-must-try dishes – char kway teow. About halfway through, I bit down and felt a sharp jolt of pain as a quarter of my back molar fell off.

I was eating NOODLES … one of the softest foods on the planet … and a QUARTER of my back MOLAR fell off.

Mind you, it didn’t stop us talking. We talked non-stop for hours and hours both pre and post molar disaster.

But I was pretty peeved about the freaking molar situation. I thought the universe owed me a nice, peaceful weekend … but no, it decided to throw an emergency dental visit into the mix.

I briefly considered having a complete meltdown about it – my bottom lip trembled quite violently – but I pulled myself together and soldiered on.

I started by finding a dentist … not the easiest of tasks on a weekend. If you ever need emergency dental care in Mermaid Beach, I thoroughly recommend Maven Dental – ask for Dr Amer Patel.

Actually everyone at the surgery was lovely, they felt like my new best friends by the time my tooth was fixed … one hour and $370 later … well, it could have been worse, a crown costs $1500. The receptionist is an ex Newie girl so we had an enthusiastic natter while I waited for my appointment and then as I settled the bill.

As for Dr Patel, he’s a total sweetheart and also an excellent source of foodie intel. He suggested that once the feeling returned to my face I go to Burleigh Heads to eat at Jimmy Wah’s.

Jimmy Wah’s served me what might be the most delicious meal I’ve had in years. Fortunately, the anaesthetic had worn off my tongue by the time entrees had arrived, though the rest of my face was still frozen until six hours after the procedure, so I may have drooled inappropriately. I certainly couldn’t apply lipstick successfully.

The betel leaves with tempura bug tail were sublime, as were the slow-cooked beef short-rib bao.

In fact, the Gold Coast completely blew me away on the food front. I enjoyed two stunning breakfasts at a place called Bam Bam Bakehouse. If you’re ever in Mermaid Beach you MUST go there. The corn cakes with poached egg, avocado and chipotle cream were fan-freaking-tastic, as was the crab omelette and the brekkie nasi goreng.

Bam Bam also introduced me to a ridiculously delicious thing called a cruffin – a hybrid of a muffin and a croissant. The one I had was Nutella flavoured and it was bloody beautiful.

Other discoveries were the Currumbin Valley, which features scenery so gorgeous I might vaguely consider living there one day, and Miami Marketta – a warehouse that’s been turned into a bar with food vans and live music. It’s also fabulous and well worth a visit.

It was a completely different side to the Gold Coast than I was expecting. And a thoroughly wonderful way to spend a weekend. I could have done without the tooth disaster – which I suspect was a stress-related injury – but the rest of it was sooooo good for the soul.

It made me feel like the luckiest unlucky girl in the world.

Here are some happy snaps to prove it: 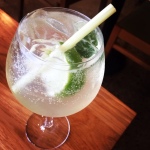 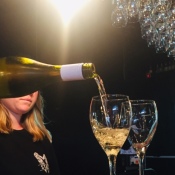 My chardy being poured at Marketta

Me enjoying the martini

Live music at Marketta, UB40 are playing there later this month 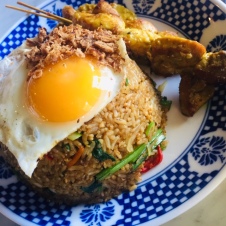 Song of the day: The Beatles “A little help from my friends”

PS Thank you to my friend Emily, her daughter Claudia and my sister for taking care of the dogs in my absence.

6 thoughts on “Of course there was an emergency”