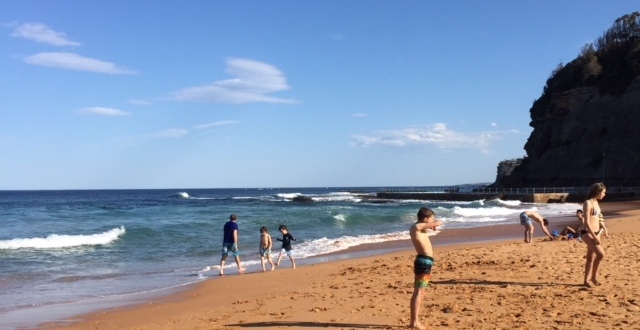 We’re a bit spoilt with our holiday these days.

And by “we” I mean my nearest and dearest, because I know our reality isn’t everyone else’s.

As a kid, I went to Surfers Paradise a couple of times. The rest of my school holidays were spent at my grandparents’ place in Hawks Nest.

And I loved every minute of it. We could swim in the river, bay or ocean each day, wander up to the shops for a Golden Gaytime in the afternoons and watch tellie at night with bowls of my Nan’s curried sausages on tea towels on our laps.

Fast forward to 2018 … and my children’s passports are full of exotic stamps.

Their next trip will be to Bali with my ex, his partner and her son.

The kids were initially shirty about going to Bali because one wanted to go to Fiji and the other preferring snowboarding. The youngest came around yesterday when her dad sent her a link to their private villa and the eldest agreed to be her official Instagram photographer.

They have no idea how lucky they are.

That said, DD and I had a bit of a stand-off last week about Bali not being on my bucket list. I’ve no idea why we argued about it, since Bali isn’t even remotely on our agenda.

But, still, I’m sooooooo not keen. I went there once for work and have no desire to return. I don’t have much time or money – I want to use what little I have on something I really want to do.

My recent trip to Shanghai is a #firstworldproblems case in point. I spent lots of time and money doing something that wasn’t on my bucket list and I didn’t feel revitalised at the end of it … though I’m glad the youngest enjoyed herself.

Of course, feeling revitalised doesn’t have to mean spending bucketloads of cash. I was lucky enough to have a few minutes of it over the weekend without leaving Sydney. I don’t know what the weather was like around your way, but it raced over 30C in my neck of the woods. I begged the youngest to go to the beach with me, but she refused. She suggested I ask DD instead. DD was clearing out his backyard, but said he could spare a few minutes for a dip. So I jumped in the car with my wetsuit.

It was a gloriously bizarre experience. The balmy breeze was blowing on my face, but my legs felt like ice blocks in the water. Luckily my tummy was nice and warm in my wettie.

DD … not so much. He was horrified by the 17C chill in the water and retreated to the sand pretty quickly.

I stayed in the water for a few extra minutes because when I’m jumping in the waves I feel at peace.

I read a BBC article where the author noted the same thing. They were writing about a theory that cold water is good for depression.

The author wrote: “Jumping into the sea in winter is the most alive and present I ever feel. I get in fast – a dangerous approach if you’re a beginner – when the cold shock response provokes an uncontrollable urge to inhale.

“Underwater, I feel an intense mixture of burning pain and, even after doing this for years, a little panic. But it’s the only time the anxious negative chatter in my head is truly silenced.”

After our dip, DD and I sat in our cossies with a glass of wine on his deck and enjoyed a few stolen moments together before we returned to single parent life.

I messed with the zen slightly by having a brief blub about how rundown I’m feeling. I’m a little guilty about that now, as I have friends who are facing major health crises at the moment.

But hey, sometimes emotions are hard to control.

I’m wishing I was back on that deck as another busy week begins sans DD.

I dropped the boyf to the airport yesterday, he’s gone to London for two days of meetings, poor thing. He’s feeling a bit rundown himself.

This morning, I’m off to the doctor at 8.45am for my blood test results, then I’m deep in Australian Drinks Awards comms, followed by an all day liquor conference tomorrow and jury duty on Wednesday … I’ve cancelled the youngest’s follow-up dermatologist appointment for Wednesday arvo, as I don’t know when or whether I’ll be off jury duty again. I can’t even make another appointment until post-Wednesday, as I might be in the trenches of the Downing Centre for 10 farking weeks.

But those are small annoyances, really, in the grand scheme of things.

And I know it will work out just fine in the long run.

It always does. Especially when the ocean is involved.