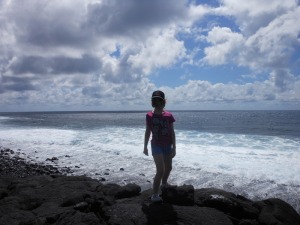 1. That I haven’t been ripped off by a Nigerian con-artist. Six months ago, I sent a $1200 cheque to a bloke called Norm Tetu. I found Norm on website where people buy and sell timeshare weeks. I bought his week at a Waikiki apartment complex. And I’ve worried ever since that it was a scam. But Husband successfully checked in to the Waikiki apartment yesterday. So Norm Tetu really is a lovely, reliable chap from upstate New York, just like he said. Phew.

2. That the Waikiki timeshare apartment not only exists, it has FREE WI-FI!!! Be still my beating heart. I’m in love with the place already.

3. That we’ve departed Hilo, the capital of Hawaii’s Big Island. Sprog 1 and I caught a cab downtown yesterday to go shopping. We discovered Cessnock by the sea – not that there’s anything wrong with that – complete with weathered gents in denim overalls fagging on the nature strip. (Actually, I’m not sure denim overalls were ever the fashion in Cessnock. Must ask Dad – former Cessnock High prefect – at our final buffet breakfast this morning.) Needless to say, not much shopping was done. Though Sprog 1 did score herself a fabulous glow-in-the-dark necklace with a real scorpion embedded in it for five bucks.

4. That the bus Sprog 1 and I caught back to the ship actually got there, eventually, after initially chugging off in exactly the opposite direction and freaking the shit out of me. The scenic route did, however, give me the opportunity to gaze forlornly out the window  as we passed Walmart and Target. I am a terribly indiscriminate shopper. I get just as excited by discount stores as the Marc By Marc Jacobs rack at Nordstrom. Unfortunately I couldn’t remember what time the ship was due to sail, so we stayed on the bus in the hope it would eventually turn towards the pier. Yay, it did, but kept driving straight past because I didn’t know how to make it stop (a little wire running along the window, I’m accustomed to red buttons).

5. That we don’t live on Hawaii’s Big Island, under constant threat of having our house engulfed by lava … Or our chooks being eaten by a mongoose. The mongoose population was introduced to the Big Island to eat the rats in the sugar cane. Only flaw in the brilliant plan? Rats forage at night and the mongoose forages by day, so the two never meet. What is it with dills introducing non-native animals to islands without doing their research first? Cane toads anyone?

6. That I can finally put the Sprogs to bed at a decent hour, instead of taking them to shows like “Award Winning Interactive Comedy Juggling Antics with David Aitken ‘The Checkerboard Guy’, also featuring the Royal Caribbean Singers and Dancers.”

7. That I will no longer giggle at aforementioned interactive comedy shows and feel vaguely ashamed. Mind you, I’ve been defriended by someone on Facebook for requesting Come On Eileen at the Starquest nightclub, so my bar is pretty low.

8. That breakfast will no longer include the temptation of hash browns, bacon, fried rice and Danishes. Instead it will be sugary American toast with Vegemite Husband has been “nagged” – his word in an email – to bring from Sydney. Speaking from experience, supermarket bread in the US is absolute filth.

9. That I can’t blather on, because I have disembarking to do! Yaaaaaaaaaaaaaay!!!!!  See you on the free wi-fi other side.

3 thoughts on “Day 19: Nine reasons to be grateful”