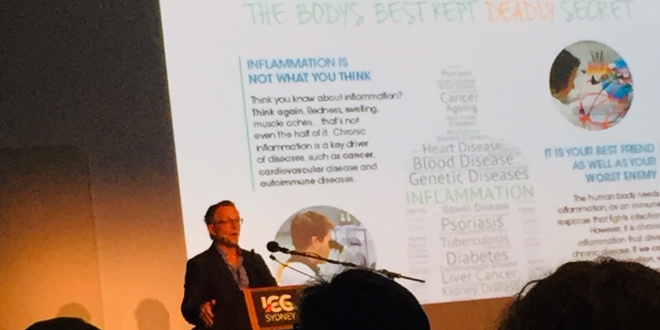 DD took me to the 14th World Congress on Inflammation yesterday.

That shouldn’t make me giggle, but it does … a lot.

DD knows how to show a girl a good time.

It was actually pretty fascinating – we were there to watch Dr Michael Mosley deliver the ‘Centenary Institute Oration’.

Before I go any further, I have a confession to make. When DD invited me to watch Dr Michael Mosley’s oration, I had no idea who he was. I thought he was an astronomer or something.

I Googled him after saying yes and discovered he was the creator of the 5:2 Diet. My next thought was, nice, my boyfriend is taking me on a date to a diet lecture.

But that’s not quite what it was about. Dr Mosley is a British physician, science journalist, documentary maker and excellent public speaker. It was much more than a weight loss seminar.

My mum was very excited when I told her. She thinks Dr Mosley is awesome because he swallowed a tapeworm once to document its effect on his body. Actually, that’s not exactly why she thinks he’s great, but it’s the bit I remember from our conversation.

Not usually eight words I would put in a sentence and get excited about.

While it sounds a bit blerk, The Centenary Institute assured me in a press release that the audience could expect an entertaining and informative talk from Dr Mosley that makes the human body, science and research accessible to all.

“Obesity and depression are widespread in Australia and it appears as if there is a common underlying mechanism involved: inflammation” explained Dr Michael Mosley in said press release. “I’m very much looking forward to talking about these very significant health issues which affect and impact so many Australians today.”

DD didn’t mention the Inflammation Congress bit in his invitation or The Centenary Institute oration element, possibly because he knows I’m a little sensitive about the institute.

I applied for a job with them as their PR once and DIDN’T EVEN GET AN INTERVIEW.

I presume it was because I was a bit tacky and don’t have a university degree. I hope it wasn’t because I’m also a bit old. I find ageism a way bigger stumbling block than sexism these days.

It’s quite confronting to apply for jobs you’re eminently qualified for and simply get a rejection letter. I’d have OWNED that job. I’d have done it with one hand tied behind my back, maybe even two.

As for the inflammation oration, well, it was quite compelling. Basically I’m going to die of diabetes or dementia if I don’t start intermittently fasting.

Intermittent fasting isn’t my favourite. I was trying to do it yesterday, which meant my tummy was grumbling all through the oration.

But Mosley was a very convincing speaker. For example, he reckons that when everyone reduced their food intake by one third during the Great Depression, the average life expectancy in America went up eight years.

He also cured his type 2 diabetes by losing 10kg on the diet.

And he reckons studies show a lot of the symptoms of depression and anxiety respond positively to dietary changes.

There was also something about fasting rats avoiding dementia, but I’d need to look that up to sound knowledgeable.

So I drank the doctor’s Kool-Aid and I’m convinced it’s a great idea, except for the fact I’m not entirely sure I have the fortitude to only eat 800 calories two days a week.

It was a bit dazzling to hear about all the health and weight loss benefits though.

No song of the day, I’m a bit tired because Dr Mosley was only the start of a very big night with DD – I’ll tell you the rest tomorrow.

3 thoughts on “Date with a diet guru”