It’s been a devastating week in California, with the deadliest fires the state has ever seen. Described as an “apocalypse” it has lead to many lives and homes being lost.

Liam Hemsworth and girlfriend Miley Cyrus were among the thousands of evacuees who returned home to find their home razed to the ground.

“It’s been a heartbreaking few days. This is what’s left of my house. Love,” Hemsworth captioned the pic above on Instagram.

“Many people in Malibu and surrounding areas in California have lost their homes also and my heart goes out to everyone who was affected by these fires.

“I spent the day in Malibu yesterday and it was amazing to see the community pulling together to help each other out in any way they can. Malibu is a strong community and this event is only going to make it stronger.

“Thankful for the all the great local guys that helped keep smaller fires out around my property. I love you guys. I love you Malibu. Thank you to all the hero firefighters around California. It’s going to be a journey to rebuild. Stay strong all.” 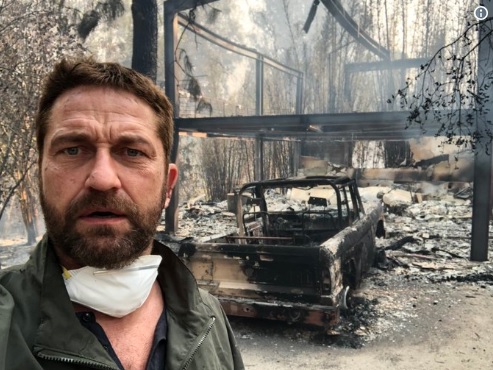 Gerard Butler’s Malibu home was also destroyed by the fire.

He tweeted: “Returned to my house in Malibu after evacuating. Heartbreaking time across California. Inspired as ever by the courage, spirit and sacrifice of firefighters. Thank you @LAFD. If you can, support these brave men and women at http://SupportLAFD.org .”

Meanwhile, Alec Baldwin’s daughter Ireland Basinger-Baldwin was accused of being a looter when she tried to reach her home.

She arrived in Malibu to rescue her possessions and try to help others escape.

However, she noted: “The officer by Kanan [the street leading into Malibu] was a complete and total a**hole. When I told him I could pull up proof of water bills or whatever I could find [to prove she was a resident], he didn’t even look at me and just told us to turn around.

‘He assumed we were looters trying to get into Malibu to steal. He didn’t say he wasn’t letting us into Malibu because of looting, he LITERALLY called us looters. He told us to turn around an cooperate or we were getting arrested.’

Ireland also slammed Donald Trump over tweets the President posted about the fires.

The first read: “There is no reason for these massive, deadly and costly forest fires in California except that forest management is so poor. Billions of dollars are given each year, with so many lives lost, all because of gross mismanagement of the forests. Remedy now, or no more Fed payments!”

A second, issued after a backlash, added: “With proper Forest Management, we can stop the devastation constantly going on in California. Get smart!”

Ireland retorted: “At this point, calling Donald Trump an a**hole or being surprised by his reaction to any of these fires is a waste of energy. All you really can do is feel sorry for him.

“He’s a sad, disgusting, classless, angry, inhumane, vile, abusive, atrocious, dull, vain, patronizing, thoughtless, unintelligent, Jabba-the-Hutt-looking excuse of a creature from the depths of hell. What do you expect from someone like that?”

Titled “The Boy and The Piano”, the advert tells Elton’s life story in reverse, showing how one gift (in this case a piano) can change everything.

According to reports, Elton was paid a massive £5 million to star in the advert.

However John Lewis told the Daily Star: “The speculation in recent months around the costs associated with this year’s ad is wildly inaccurate.”

As for the total cost of making the advert, the department store is keeping that figure under wraps, but a spokesperson from the marketing team told The Metro: “We want to talk about the speculation that came out earlier, because there were some numbers being banded around.

“We don’t give out a number, but in previous years it has been spoken about being £7 million [$12million], and it is the same territory this year.

“But the vast majority of that is on media spend, and then it also includes production of the ad, our ad windows, everything – it’s the whole package.”

John Lewis released a statement that said: “Elton requested that a portion of his fee was to be donated to the Elton John Charitable Trust.”

Speaking about the advert, Elton noted: “The John Lewis Christmas campaign has so many warm memories for me and my family.

“It’s been a lovely opportunity for me to reflect on my life in music and the incredible journey I have been on, and how first playing my grandmother’s piano marks the moment when music came into my life. The ad is absolutely fantastic and I’ve truly loved every minute of being a part of it.” 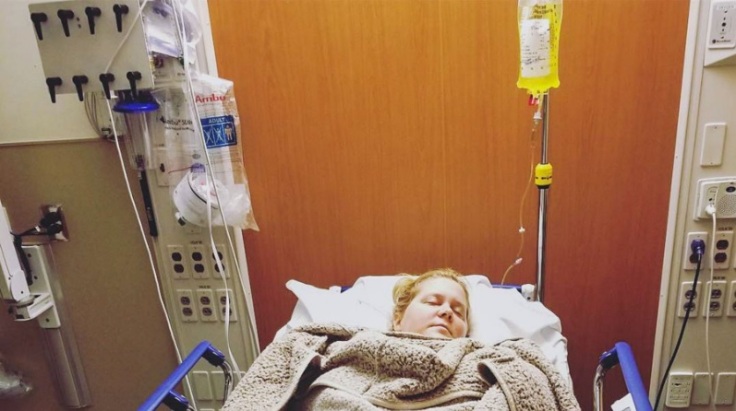 Amy Schumer was hospitalised last week with hyperemesis gravidarum, a form of acute morning sickness that Kate Middleton experienced in all three of her pregnancies.

She was forced to cancel some comedy gigs as a result.

“Texas I am so deeply sorry. I have been really looking forward to these shows. I have to reschedule,” Schumer captioned a photo of herself on a stretcher. “I am in the hospital. I’m fine. Baby’s fine but everyone who says the 2nd trimester is better is not telling the full story.”

“I’ve been even more ill this trimester. I have hyperemesis and it blows,” she admitted. “Very lucky to be pregnant but this is some bulls—! Sending so much love to the doctors and nurses taking great care of me and [my dog] Tati! They are cool as hell! And Texas I am really really sorry and I’ll be out there as soon as I’m better.” 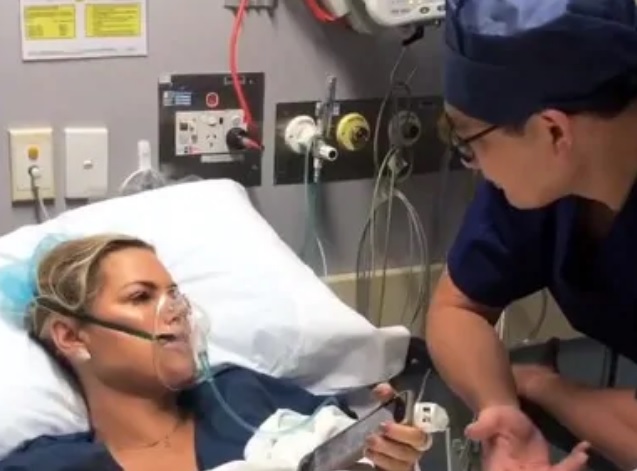 Sophie Monk was also hospitalised this week, in her case it was for endometriosis surgery.

Monk published a video on Instagram showing herself on a gurney unconscious under anaesthetic being tended by medical staff.

She captioned it: “So many women live not knowing they have endometriosis. If you have annoying cycles. You should ask your doctor,” and added a heart emoji.

Rebel Wilson was ordered to repay her multimillion-dollar payout from Bauer Media after the High Court knocked back special leave for her to fight her defamation case.

Wilson’s barristers sought special leave to appeal after she was forced to repay almost 90% of her record $4.7 million payout to Woman’s Day.

The court refused the application, with costs. Wilson will retain $600,000 of the original payout after repaying about $4.1 million but is understood to be out of pocket at least $2 million in legal expenses on top of that.

Sydney Law School defamation expert, Professor David Rolph, told news.com.au that the High Court case would have likely cost both parties millions of dollars each for “barristers, solicitors and all sorts of things”.

“The Victorian Court of Appeal found the trial judge made a number of errors in reaching the conclusion Wilson suffered economic loss,” Prof Rolph said.

“The largest component of the damages awarded to Wilson were for economic loss which is difficult to prove, the judge was convinced but not the Court of Appeal.”

Wilson tweeted: “It’s been a long journey in the Australian courts these past few years and I am glad the matter is now at a definite end. I have been determined to stand up to a bully and I am proud of myself for doing so. To win such a huge case and receive $600 000 in damages from Bauer Media is extremely significant and close to an Australian record! The clear jury verdict vindicated my reputation, and now everybody knows the truth about the disgusting behaviour of this media company, who have been found guilty of malicious defamation.”

Bauer chief executive Paul Dykzeul said in a statement: “Our audience trust our content and our writers and they love our iconic brands like Woman’s Day and Australian Women’s Weekly.”

Yep, he really said that.

During her defamation trial in the Supreme Court of Victoria last year, Wilson proved journalists from Bauer had painted her a serial liar about her real name, age and childhood in order to make it in Hollywood.

The Prince of Wales was photographed surrounded by his family to celebrate his 70th birthday – with Prince George giggling on his grandfather’s knee.

The heir to the throne is pictured on a bench with his grandson and seated beside them are the Duchess of Cornwall and Princess Charlotte.

The photo shoot was staged in the garden of Clarence House in September, before Harry and Meghan left for their tour of the Pacific, which concluded last month.