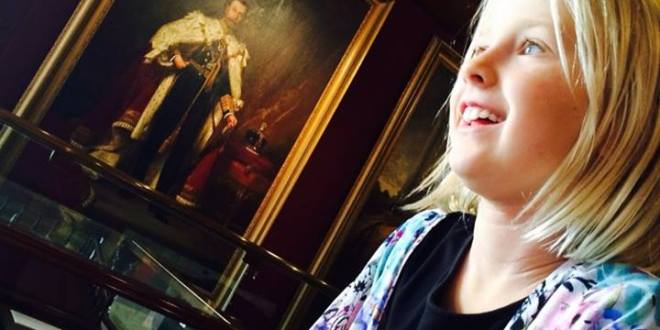 My baby is going to high school! I can’t believe I took her to the orientation yesterday.

She insisted her dad drop her off to my place and he wasn’t allowed to come along. Apparently attending high school orientation is a mum job. He’s going to pay her back by appearing uninvited at her school Presentation Day today, where she’s making her last tenor saxophone appearance as a primary schooler.

I’ll have to miss that one as there are only so many times I can ask to be out of the office. Attending school-based events feels like a full-time job in itself at the moment.

But back to the orientation day. I can’t say I loved it. The Year 7 co-ordinator appeared to be public speaking for the very first time – she read from a sheet of paper in a startlingly robotic fashion. I’m not sure it was the ideal way to let the kids know she was sympathetic and approachable. A bit of eye contact and warmth might have been better, but it’s probably pretty scary to find yourself addressing a school hall full of people.

The “wellbeing” teacher was a little too obsessed with the importance of socks appropriately covering ankles for my liking. I would have thought mental health was a far bigger concern. And the deputy principal was so stern and grim that she reminded me of Dolores Umbridge. Admittedly neither of them are on my favourite list after their prim approach to the eldest’s name change.

But yesterday wasn’t about me, it was about the youngest, who sat there with the biggest, open-mouthed grin on her face. She was totally stoked by it all and desperate to ditch me so she could go on a tour of the school with some of the seniors.

I was left behind to sort out the paperwork and pay the school fees. I’m still feeling a bit poorly so I stared half-heartedly at the payments queue and decided to abandon ship and do it online instead.

I was very grateful I’d already done my uniform shopping as the queue for that was literally about 50 deep.

Next on my to-do list is to get the youngest an appointment to have her hair trimmed, washed and braided next Monday night for her Year 6 Graduation, which has a tropical theme. [Ironically she has surf ed beforehand, but doesn’t think surf hair would be cool, hence the wash.] Most places are closed on Mondays and another that could only do 2.45pm. The hunt continues …

Geez the kid commitments are piling up.

I should be on hall decorating duty this Sunday for the graduation, but I’ve been guilted into selling Christmas trees at the local scout hall for three hours instead. It’s a bit of a bummer because the eldest has no intention of going to Scouts next year and is only hanging around until they go target shooting on Thursday night.

Which reminds me I need to find someone to take the eldest on the 45 minute journey to target shooting. I can’t do it because I have a skipping dinner for the youngest.

And so the juggling act continues.

Far out I’d forgotten how full-on December can be.

I may spend most of the Christmas to New Year break in bed.

Song of the day: Paul Simon “The Boy in the Bubble”